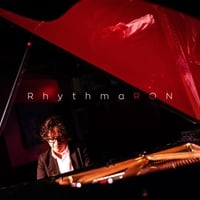 Ron Davis, Toronto’s much-loved jazz pianist, has created a musical style that is simply known as “Ron’s style”. RhythmaRON, Ron Davis’ first solo piano album in his 40-year career, is a trip back to the basics to where it began. It is solo piano in the style of the greats: Earl “Fatha” Hines, Thomas “Fats” Waller, Willie “The Lion” Smith, Thelonious Monk, Oscar Peterson and Art Tatum. These are the works that shaped his world, the ones that he fastidiously studied until he knew every note, every pause and every part. “Handful of Keys”, “Piano Starts Here”, “Tracks”, “Solo Monk” were on his heavy rotation list and he performs them as only Ron Davis can. As Ron puts it: “Those records got me started. They lit a fire in me. I began practicing as much as I could, so I could sound like my idols. Solo piano was where I wanted to go, and I got there eventually. First in the basement on my own, then in school and finally at my first gigs, all before I was old enough to vote, and all solo. When I started playing piano I played solo, and after 20 years of duos, trios, quartets and shows with my eight musician Pocket SymphRONica, I’m going back to where I began. “ RhythmaRON is Ron Davis’ eleventh album and includes the sounds and styles that informed his musical world from his beginnings as a pianist through to today. Ron Davis loves to share music and to add his creative twist to everything that he performs.

All About Jazz musician pages are maintained by musicians, publicists and trusted members like you. Interested? Tell us why you would like to improve the Rhythmaron musician page.