The virtuoso pianist has been compared to Brian Wilson, Miles Davis, The Beatles, and Sun Ra— but as All About Jazz said in its review of Rising Rose Records 2004 release Ghost His writing is unmistakably original ….

Nine ( Dec. 2012) is an utterly unique collection of euphonic recipes, conjuring past and future stories with a mercurial texture and a melodic narrative. It's a masterful trio recording featuring the prolific musician, producer and film composer Bruce Ditmas on Drums plus Daniel Carter and Ned Goold each sitting in for their second Rising Rose session on Tenor.

Rising Rose Bakery (2011) is a tripped out exploration of improvisational psychadelic composition. Pop sensibility. Jazz essence. A lucid incarnation. Multi-instrumentalist Daniel Carter joins a select group of original musicians who have recorded on Rising Rose Records. His collaboration is instantly karmic and ignites the ensemble engine of this fluidly structured recording.

Downtown Music Gallery says in it's reviews of Uncovered (Rising Rose 2009) and Astral Prints (Rising Rose 2010) “Richard is in a class of his own.../ would be world famous in a better balanced universe”.

His lyrics have been described as profound, cryptic, silly, perceptive and poetic.

Richard Bliwas at Plan B (NYC) on June 15th

Richard Bliwas Performs at Googie's Lounge (Upstairs from the Living...

Richard Bliwas Performs at Googie's Lounge ( Upstairs from the Living...

Richard is in a class of his own
Dowtown Music Gallery
Bliwas walks the line between jazz and folkrock with confidence…producing a dialectic sound that compliments rather than conflicts.
Shredding Paper
Bliwas transforms intricate phrases into seamless music
Cadence Magazine
A truly gifted pianist and composer
Dowtown Music Gallery 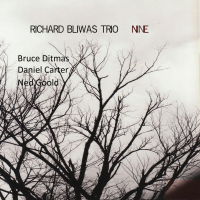 All About Jazz musician pages are maintained by musicians, publicists and trusted members like you. Interested? Tell us why you would like to improve the Richard Bliwas musician page.