Richard Oppenheim has logged road time with the bands of Illinois Jacquet and Buddy Rich, and headed up the sax section in Marvin Gaye’s large touring unit. After putting in a year and a half with the Paul Jeffrey Octet, he segued into the octet of valve trombonist Marshall Brown, and played baritone sax with Jaki Byard and the Apollo Stompers. Two smaller ensembles, Fat Doggie and Zambomba, led respectively by Gregory Alper and Mark Holen, allowed him to stretch in the intrepid company of Bern Nix, Shelley Hirsch, Ray Anderson, and Chuck Loeb, among others. Oppenheim also fronted bebop trios featuring Cameron Brown, Eliot Zigmund, and Bill Goodwin, and shared the bandstand with Charles Mingus, Clifford Jordan, Lionel Hampton, Dave Liebman, and Dennis Charles.

A tour of Haiti with the compas outfit System Band brought an opportunity to pour his style into a different mold. Sets often lasted for hours, with Oppenheim frequently called upon to deliver marathon solos over lengthy vamps. In common with many jazz musicians, some of his most formative experiences have come sitting in with such blues men as Lonnie Brooks, Otis Rush, and Mike Bloomfield, all of whom established their reputations in Oppenheim’s native Chicago environs. In the realm of rock, he has worked and recorded with Foghat, Mick Ronson and Ian Hunter, and The Rattlers. He has played alongside Neil Young, Johnny Winter, Bernard “Pretty” Purdie, and David Johanssen. 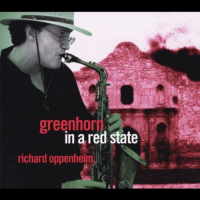 Greenhorn in a Red...

All About Jazz musician pages are maintained by musicians, publicists and trusted members like you. Interested? Tell us why you would like to improve the Richard Oppenheim musician page.