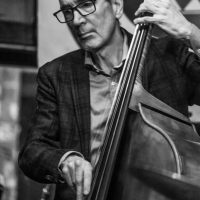 Richard Whiteman is a multi-instrumentalist based in Toronto, Canada. Introduced to the piano as a child, Richard enthusiastically took classical piano lessons for ten years which gave him a life- long love for the music of Bach, Beethoven, Chopin, Ravel and Debussy. While in high school jazz music entered Richard’s life via radio, television(Oscar Peterson often appeared on CBC during the 70’s) and his school’s big band.

Whiteman earned a Bachelor of Music degree at the University of Toronto where he studied with composer/arranger Phil Nimmons among others. Upon graduation Richard’s career began in earnest with performances with notable Canadian musicians, including Don Thompson, Reg Schwager, Jane Bunnett, Norm Villleneuve, Ed Bickert and Al Henderson.

Not content with being a pianist, Richard began studying the double bass in 2004, quickly becoming an adept performer and formed his“bass” quartet with Reg Schwager, Amanda Tosoff and Morgan Childs in 2012.

Richard has recorded ten CDs as a bandleader and has established himself as one of Canada’s finest musicians in a performing role and as a mentor and teacher to younger musicians.

All About Jazz musician pages are maintained by musicians, publicists and trusted members like you. Interested? Tell us why you would like to improve the Richard Whiteman musician page.