Rich Siegel has been a fixture on the New York music scene for many years, as pianist, vocalist, bandleader, and musical director. He has appeared in the Off Broadway shows “Our Sinatra” and “Jacques Brel Returns”. He has played New York's top piano rooms, at the Carlyle, the St. Regis, the Waldorf-Astoria, Tavern on the Green, and many others, as well as internationally, in France, Japan, West Africa, Canada, Mexico, and on cruise ships. He has accompanied many name acts including pop stars Diahann Carroll, Laura Branigan, Chinese pop star Karen Tong, and jazz vocalists and cabaret stars including Richard Skipper. He has recently released a new CD entitled “The Way to Peace”, which features original songs and covers in a marriage of spirituality and peace activism. Rich is a graduate of the School of Music at Indiana University.

Dance to the Rich Siegel Orchestra

”Not only has Siegel achieved his aim of combining a message for peace with his spirituality but in the process he has come up with a gorgeous album that is more than compelling and that bristles with naked truth and beauty. A deeply haunting beauty that is most memorable.” -Rich Sharm, Rainlore's World of Music (British Music Site) 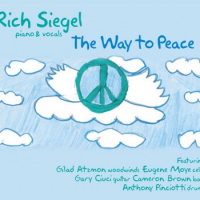 The Way to Peace

All About Jazz musician pages are maintained by musicians, publicists and trusted members like you. Interested? Tell us why you would like to improve the Rich Siegel musician page.