From the moment she first appeared in front of us on Saturday Night Live in 1979, Rickie Lee Jones has challenged her listeners and the establishment with an absorbing musical vision that defies border and classification. She rocked the culture of singer-song writerdom with her refusal to conform to the stayed and careful eloquence of the folk rock generation that came before her. Neither punk nor pop, she tottered on a thread of her own devise, jazz—the old musical kind, and R&B - the Motown thread that permeates her work. Her sense of humor, musical dexterity and song craft is all evident on her exquisite new album Balm in Gilead.

Jones, who’s joined on the record by Ben Harper, Jon Brion, Vic Chesnutt, Bill Frisell, Victoria Williams and Alison Krauss among other highly talented friends, has again captured her generation’s common experience. “This record was made for people my age.” says Jones, a single mother living in California. “Neither young, nor old—we fall in between. We love all sorts of music, we’ve experienced life. I’m getting along and I pay my rent. I think my life is like everybody else’s, and I was thinking about the audience, not just myself, as I wrote it. We’re older now. And it’s not all about me, or all about us. It’s about our kids, and our parents who are dying, and the things that are relevant to us at this age. I really wanted to talk to us. To my generation, music is the balm that keeps us going.”

Balm in Gilead’s songs move seamlessly through its roots and R&B fabric, a ‘western noir’, cinematic in scope, expansive in detail, which Rickie only later realized perfectly encapsulated her journey. “These songs speak of that journey, my life in the western U.S., its joy and its downtown urban blues.” The album’s title emanates from an Old Testament passage from the book of Jeremiah that was adapted for an African-American spiritual with the line that promises “there is a balm in Gilead that makes the wounded whole.” Jones reflecting on the new album says “We all share much more than anything that separates us.”

The album’s charms include the R&B-flavored opener “Wild girl” written about her daughter, “The Gospel of Carlos, Norman and Smith” a reflection on society’s racial injustice and its human ramifications; “Old Enough” (recorded as a duet with Ben Harper) and “The Moon Is Made of Gold,” a star-dusted acoustic jazz gem, written by her father decades ago. “That’s my daddy’s song, and I finally got to do it. He wrote it around '54. They had those record booths in the bus station, and my dad and my uncle went in and recorded it,” she recalled. “A magic thing happened when we did 'The Moon is Made of Gold.' I hired this guitar player who really plays the old way that my uncle played, kind of a Mills Brothers thing. And when he was playing it with me, he whistled in the solo. In that recording of my dad and uncle doing that song, my uncle whistled the solo. So when the guitar player did that, I was just: Oh my gosh, they’re here. It was really wonderful.”

Other highlights include the emotionally raw “Bonfires,” the gorgeous ambience of “His Jeweled Floor” (on which she plays all the instruments except bass and accordion) and the wild-dog howl of “Blue Ghazel.”

Rickie Lee Jones, released by Warner Bros. in March 1979, had an immediate and profound impact in the music world and the culture at large ultimately becoming a multi-million selling hit. Following her now infamous debut television appearance on SNL, a successful world tour and the cover of Rolling Stone magazine, Jones secured five Grammy Award nominations (Record of the Year, Best Pop Vocal Performance, Female, Best Rock Vocal Performance, Female, Song of the Year (”Chuck E.'s in Love”), and Best New Artist, which she won at the January 1980 ceremony.

Her second release, the highly celebrated Pirates further pushed the singer-songwriter edges, receiving positively radiant reviews, including 5 Stars from Rolling Stone who put her on their cover for the 2nd time. The album’s artistic ambition, influence and enduring inspiration has only grown in stature since its release evidenced by its inclusion in Tom Moon’s recent book 1000 Recordings To Hear Before You Die. Her third release, Girl at Her Volcano, a collection of jazz and pop standards which includes the definitive “My Funny Valentine,” found Jones again carving her road less traveled.

After moving to France in 1986 she returned to the U.S. to release Flying Cowboys, another stunning collection, this one produced by Steely Dan’s Walter Becker and featuring the hit “Satellites”. Always stretching, yearning and learning to keep herself and her audience in the moment, she followed Cowboys with records designed to blur lines and stay free including Pop Pop, an Argentinean flavored jazz & blues standards record.

In 1988 she was nominated for a Grammy for Best Jazz Vocal for her rendition of “Autumn Leaves” on Rob Wassermann's Duets album. The following year her duet with long time pal Dr. John on “Making Whoopee”, won both of them a Grammy for Best Jazz Performance. During the nineteen nineties she released the albums Traffic from Paradise with contributions from Leo Kottke, David Hildago and Jim Keltner among others, Naked Songs—Live and Acoustic, a set of her songs performed solo and the trip-hop-flavored, electronic adventure Ghostyhead, released in 1997.

In 2000, she signed with Artemis to release It's Like This, another record of fearlessly chosen cover songs including Steely Dan’s “Show Biz Kids”, Steve Winwood’s “Low Spark of High Healed Boys”, Charlie Chaplin’s “Smile”, The Beatles’ “For No One” and Leonard Bernstein’s “One Hand, One Heart”. It’s Like This garnered Jones her eighth Grammy nomination. 2003’s Evening of My Best Day was released by V2, among its highlights: “Ugly Man”, which took direct aim at George Bush and his administration. In 2007 she released Sermon On Exposition Blvd., on which she improvised her own impression of the texts of Jesus Christ, melody and lyric.

At 54, with her deeply ingrained vaudevillian heritage well intact, from the heights of popular music to the deepest respect of her peers and appreciative fans, Rickie Lee Jones was, and remains, a unique artist of undeniable influence on singers and songwriters today. She has worked with artists as diverse as Walter Becker and Mike Watt and all points between. She writes albums, not songs, a rare art indeed in 2009. Celebrating her 30th anniversary making music, Balm in Gilead (released by Fantasy Records/Concord Music Group) promises to be one of the top recordings of the year. Show less

Rickie Lee Jones on Bix, Billie and the art of song 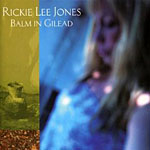 All About Jazz musician pages are maintained by musicians, publicists and trusted members like you. Interested? Tell us why you would like to improve the Rickie Lee Jones musician page.