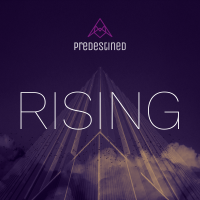 "Rising" would not be possible without the time, passion, and talent provided by its members. I am forever indebted to Brady Leafloor, Stephen Adubofuor, Nick Miller, and Clayton Connell. Without them, this band would not exist. They have invested countless hours into these songs, and gone far beyond the norm for this band, and I can never thank them enough. PreDestined started off as a last-ditch effort for me during a period where I felt great disaffection with the state of my career. With the help of my bandmates, it has transformed into a monster of a project, and this album is something I remain immensely proud of, and I feel perfectly embodies the sound and idea of what PreDestined is. Our music has always been about fighting back against the demons in our lives, against the complacency and ambivalence in our lives, and pushing ourselves to be better. Mark Ferguson is also owed a debt of gratitude. He played a pivotal part in the creation of this album, allowing me to bounce ideas off of him, and showing me how to write a song. Chuck Burrows as well, for being my mentor and instructor for the past six years. Thank you to Jason Jaknunas. His feedback during the recording process pushed us to deliver the best we could, and his expert mixing and mastering has made this album sound amazing. Cheryl McIntyre and Pat Liston as well, for making sure I wasn't homeless. Thank you to all our supporters who have helped us through this. I love you all. - Matt Welsh

All About Jazz musician pages are maintained by musicians, publicists and trusted members like you. Interested? Tell us why you would like to improve the Rising musician page.