Drummer RJ Spangler has been on the Detroit music seen for many years, in fact he earned his first Motor City Music Award in 1982 with a band he co-founded called the Sun Messengers. After 17 years as a Messenger, RJ went on to running the band for Detroit blues master Johnnie Bassett. With Johnnie RJ made his way across America and Europe many times.

Today he is a WC Handy award nominated drummer, a record producer and manager/drummer for Alberta Adams, Joe Weaver, the Motor City R&B Pioneers and the Odessa Harris Group. RJ is on over 30 nationally available CDs.

RJ's latest projest is an organ jazz group called the RJ Spangler Trio that features Keith Kaminski on sax and Duncan McMillan on organ. Frequent guests at their regular Tuesday night gig at the Buzz Bar in downtown Detroit include Bluesman Johnnie Bassett, trumpet great Dwight Adams and others. RJ is also forming a tentette with trumpeter James O'Donnell, playing the music of Duke Ellington to Sun Ra. 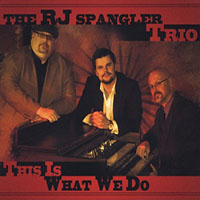 This Is What We Do

All About Jazz musician pages are maintained by musicians, publicists and trusted members like you. Interested? Tell us why you would like to improve the RJ Spangler musician page.