Rob has spent the past 20 years as a professional Trumpet player and educator. Mr. Diener has performed all over the country in every genre of music imaginable. He has played in clasical ensembles, jazz groups, rock groups, theater productions, and has even performed for major sporting events such as Nascar. In 2003 Mr. Diener formed his own band Anomaly, which has 2 cds to its credit that were reviewed nationally.﻿ Rob has performed with such artists as Greg Karukas, Gerald Veasley, Rick Braun, Chuck Loeb, Jeff Kashiwa, Richard Elliot, Joe McBride, The LA Chillharmonic, Brian Bromberg, The Heads Up Superband, and Chieli Micucci and Special EFX. He has also Played the National tour of the Broadway musical 42nd Street, as well as subbing on the North American tour of The Producers. He has also appeared at the Berks Jazz Fest, The Rehobeth Jazz Fest, the Point Pleasant Jazz and Blues Festival, The Central Pennsylvania Friends of Jazz festival, and Bethlehem Musikfest.﻿ Mr. Diener likes to use his vast experience to make learning the trumpet a fun, and positive experience for his students. If you ask Rob, he will tell you that he himself is a constant student of the trumpet, and enjoys passing along his findings to students and colleagues alike.﻿﻿﻿ 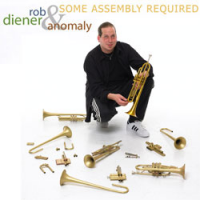 All About Jazz musician pages are maintained by musicians, publicists and trusted members like you. Interested? Tell us why you would like to improve the Rob Diener musician page.