There is a distinguished lineage of post-bop pianists who collaborated with the legendary Miles Davis: Bill Evans, Herbie Hancock, Keith Jarrett, Chick Corea and Joe Zawinul. Add to that list of superb artists Robert Irving III, who served as Miles’ last pianist/keyboardist and who proved to be his longest collaborator and musical director. After nearly twenty years since his last outing as a leader, Irving returns with his remarkable new recording, New Momentum, a largely acoustic piano trio CD that is the premiere album for the new label Sonic Portraits.

Irving’s career as a musician began as a brass player at the age of 10. His first instrument was the bugle, followed by a range of brass instruments including coronet, French horn and valve and slide trombone. While he was a brass player, Irving also studied piano to further his knowledge of musical theory, mentored by his high school jazz band teacher.

He came to the Miles Davis collaboration as a musical storyteller. Through Miles’ mentoring�”beginning in 1979 and lasting until his death in 1991�”Irving became an accomplished acoustic jazz pianist through the application and interpretation of conceptual lessons he learned from the iconic jazz great. Eventually, Irving incorporated it all into an evolved acoustic piano technique that is on display on New Momentum, which features drummer Yussef Ernie Adams and bassists Buster Williams (on five of the eight tracks) and Marlene Rosenberg (on the three other cuts).

The Miles Davis Collaboration A native of Chicago, Irving was one of a group of young Chicago musicians who in the late ‘70s and early ‘80s formed the nucleus of Miles’ recording and touring bands. It was Irving’s composition “Space” (performed by him and his talented Chicago-based group) that captured Davis' interest. That led to Miles inviting him and the Chicago musicians to New York in 1979 for his first recording sessions in several years. As it turned out, Irving’s music served as the impetus and motivation for the jazz great to resume his largely dormant (1974 to 1979) musical journey. Miles used the sound and direction as a catalyst to propel himself into the last phase of his life and career (1979 to 1991).

The fruits of these sessions were included on the 1981 album, The Man With the Horn, the first recording Davis had released in six years. The title track, “The Man With the Horn,” was written and arranged by Irving, who also co-wrote and arranged another track titled “Shout.” In 1983 Davis invited Irving to work as composer, keyboard player, arranger and co-producer for the sessions that resulted in the album Decoy. He also invited Irving to join his touring band, where he remained for five years, holding the keyboard chair and assuming the role of music director. In the latter role, Irving was responsible for musical arrangements, rehearsals (which Davis seldom attended) and musical liaison between Davis and group members that included jazz lions such as John Scofield, Bill Evans, Mike Stern, Kenny Garrett and Darryl Jones. In the musical director role, Irving listened to recordings of each night’s performance with Davis to cull spontaneous creative ideas that then became a permanent part of the group’s musical arrangements.

In addition to Decoy, Irving collaborated with Davis (as composer, producer and arranger) on the 1985 recording, You're Under Arrest. The album included Grammy-nominated covers of “Time After Time” and “Human Nature.” While working on the material for You're Under Arrest, Irving added to his arranging credentials by studying with Gil Evans, who decades earlier had arranged some of Davis’ most celebrated recordings. Later, Irving and Miles extended this musical direction on projects such as Irving’s film score for Street Smart, which starred Morgan Freeman in his first Oscar-nominated performance. Those sessions featured Miles Davis on trumpet.

Post-Miles Career After so many successes with Davis, Irving left his band in 1988 and embarked on his solo musical journey. At the time of the transition of his relationship with Miles, Irving parted with this final gift from his mentor: “Music is a painting you can hear, and a painting is music you can see. It’s time for you to start working on your own canvasses.”

In 1988, Irving recorded his debut album, Midnight Dream, for Verve Forecast/Polygram Records. Since then Irving, based in Chicago, has enjoyed a prolific career as touring musician, composer, arranger, producer and educator. In the Chicago jazz community alone, Irving has taught at numerous schools, workshops and community events, and he founded Chicago’s African Arts Ensemble. Irving also composed the score for George Tillman Jr.'s 1995 feature film, Scenes for the Soul, as well as for the Miami Chamber Symphony: Mademoiselle Mandarin, a concerto for jazz harp and orchestra that featured Swiss harpist, Markus Klinko. Throughout the years, in addition to leading his own bands, Irving has worked with a number of jazz notables, including Ramsey Lewis, Chick Corea, Pharaoh Sanders, Terri Lyne Carrington, Wallace Roney, David Murray, Gary Bartz, Buster Williams, Lenny White, Al Foster, Regina Carter, Kirk Whalum, Donald Byrd and Eddie Henderson. In addition, at Davis’ urging, Irving took up painting. He began painting regularly in 1997 and has seen his work exhibited in a number of galleries. Show less 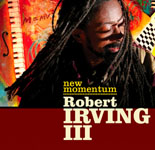 All About Jazz musician pages are maintained by musicians, publicists and trusted members like you. Interested? Tell us why you would like to improve the Robert Irving III musician page.