Roberto Poveda is a unique artist. Since its start in Cuba, in the year 1979, writing and singing his own songs in the portals of La Vibora neigborhood, up to the stage at the National Theatre, always showed a profound and uncomplicated manner of re-create his reality. That has become more evident over the years and because his wandering among the arts combining sounds, images and experiences. In the journey that got him here, Poveda, Robert lived in Bogota, Colombia for the period of eight years in which not only participated in the music scene in Bogota, but also the musical theater and television experience, would influence later his sound world. Coming to Miami in 1997, wrote a catalog of over one hundred songs for Peermusic, “lived as Carmelina”, bites the dust of defeat, and then recovered to record Son Electrico (2004) - selected by Putumayo World Records compilation Latin Lounge (2006) with his song Sueño Mama. His relaxed vocal style - without the stylization of the singers of the Latin music scene - called the attention of Alfredo Triff with whom he recorded Boleros Perdidos (2006) and a discrete intervention in DadaSon (2009). In 2006 Poveda leaves Miami for New York to meet Kip Hanrahan with whom he establishes an immediate connection. Hence comes his collaboration with Kip in At Home in Anger (2012) and his participation in two concerts with the band Beautiful Scars in the Ljubljana Jazz Festival, and the Lugano Jazz Estival all in (2010). Later that same year he met Fima Ephron, who shows admiration and interest for his music and they start working on the songs it contains Brooklyn Nights (2012) –his most recent album. Throughout the process, including recording and mixing by Michael Brorby at Acoustic Recordings Studio in Brooklyn, to the conception and realization of the cover, designed exclusively for this project by Cuban artist Arturo Cuenca, was always essential the collaboration of Point Of View Productions in the realization of this album. That’s why today we want to celebrate and invite them to enjoy with us the new album of Roberto Poveda & Brooklyn Nights.

Roberto Poveda guitar, acoustic
Roberto Poveda, is without a doubt a performer with the unique ability of reaching deep down into his Cuban roots, and deliver Soulful, Eclectic, and Hypnotizing songs which he both writes and performs with the passion of a true artist.

Poveda is a performer who has wandered with his guitar from one venue to another over the past few years, building an audience of loyal followers. Povedas' unique approach in combining the various Cuban music forms of Son, Bolero, Rumba, & Timba, with Jazz, R & B, and Rap has resulted in a sound all his own.

Following in the steps of his grandfather, a Cuban Trobadour in the traditional vein, Poveda joined Havana's Nueva Trova movement, maturing musically among a new generation of Cuban singer / songwriters

Roberto Poveda, is without a doubt a performer with the unique ability of reaching deep down into his Cuban roots, and deliver Soulful, Eclectic, and Hypnotizing songs which he both writes and performs with the passion of a true artist.

Poveda is a performer who has wandered with his guitar from one venue to another over the past few years, building an audience of loyal followers. Povedas' unique approach in combining the various Cuban music forms of Son, Bolero, Rumba, & Timba, with Jazz, R & B, and Rap has resulted in a sound all his own.

Following in the steps of his grandfather, a Cuban Trobadour in the traditional vein, Poveda joined Havana's Nueva Trova movement, maturing musically among a new generation of Cuban singer / songwriters. In 1989 Poveda moved to Colombia, where he starred in Soap Operas, and in 1997 he relocated to Miami with a publishing deal with Peer Music. Commissioned to write the kind of catchy pop that could be recorded by Latin stars and hit the charts. (His brother, Donato, is one such Latin hitmaker).

As with his live shows, Poveda experiments here with a gamut of ballad-based styles, incorporating Son, Bolero, and R & B. The results are often reminiscent of the music of other artists, ranging from the updated country son of the late Cuban star Polo Montanez, the electric licks of Santana, and the disparate Cuban folk-rock styles of Povedas Cuban contemporaries.

With simmering intensity that never has to reach a boiling point to profoundly effect the listener, the debut album from nueva trova protagonist Roberto Poveda, Son Electrico is yet another jewel in Miami's crown, as Latin America's musical capitol. Simultaneously balancing a rootsy aesthetic with very modern ideas and content, Poveda will remind listeners of the genius of cross-genre artists like Taj Mahal and Norah Jones. The singer/songwriter comes to the major-label table at the end of a very long musical journey. Born in Cuba, Poveda established himself as an important figure in the nueva trova cubana movement throughout the '80s before relocating to Bogota, Colombia. After several years' work in theater and film, Poveda recolated again and finally to Miami, where a publishing deal allowed him to focus solely on his music and the writing process. Regular live performances won him both a fan base, and the opportunity to record his own record. The resulting project features some of the most subtle, sensual songwriting to heard today. The tone of the record is delightfully organic and raw. Poveda's electric guitar playing is intelligent and sparse, not often the case in Latin music contexts. His taste for production is as sensitive and refined as his songcraft. Poveda's debut performance is of a strength and consistency not often seen. Brilliant. Evan C. Gutierrez, AllMusic Guide

“Like the aroma of a cigar in a bar of Old Havana, with a taste of blues & son, memories of the Nueva Trova and whispers a-la-Chico Buarque, Roberto Poveda gives us this precious music box as a gift.” Diana Molina - People en Español

“Roberto Poveda, whose electric guitar and voice were all he needed for volatile syncopations” Jon Pareles - New York Times

“During an interview at El Hueco a few days after the feast of Babalu Aye, Poveda tells how he came to Miami three years ago from Colombia, where he had lived since leaving his native Havana in 1989.” Celeste F. Delgado - New Times 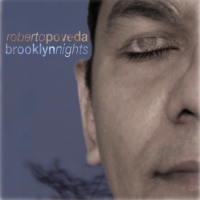 All About Jazz musician pages are maintained by musicians, publicists and trusted members like you. Interested? Tell us why you would like to improve the Roberto Poveda musician page.