As the legendary bassist for the Tower of Power Rocco Prestia, has defined his own style and become synonymous with the much-imitated ‘Finger Style Funk' that he pioneered. A true innovator of his instrument, he is considered one of the premier bassists in music today.

Francis Rocco Prestia was born on March 7, 1951, in Sonora, California. Initially taking some guitar lessons Rocco stuck with the instrument long enough to audition for classmate Emilio Castillo's band at age 14. Under the tutelage of jazz guitarist Terry Saunders, he switched to bass. Saunders began teaching the band members how to play their parts for cover versions of tunes by the likes of the Beatles, the Animals, and Paul Revere & the Raiders. Before long, tenor saxophonist Castillo got hip to soul music through an East Bay horn band called the Spiders. He immediately added horns to his group, and the band began covering R&B tunes by James Brown, Sam & Dave, Wilson Pickett, the Temptations, and Booker T. & the MG's. Of his own evolution during this period, Rocco says, “My influences were sounds more than specific bassists: Motown, Memphis, Muscle Shoals, Atlantic, and James Brown. It wasn't until later that I became aware of names like James Jamerson, Duck Dunn, Chuck Rainey, and Jerry Jemmott.”

With the horn section having swelled to five and the band having become a fixture at local clubs and dances, Castillo and Kupka (who came up with the name Tower Of Power) began writing originals. The final piece fell into place with the addition of drummer Dave Garibaldi in 1969.

After a successful TOP performance at the Fillmore Auditorium in San Francisco, legendary rock impresario Bill Graham signed the band to his management company and released their first recording, East Bay Grease, on his San Francisco Records label in 1971. The raw but critically acclaimed album resulted in a deal with Warner Bros. in 1972. TOP soon hit its stride, driven by the subdivision like-mindedness of Prestia, Garibaldi, Thompson, and Conte in the rhythm section. The subsequent albums “Bump City,” “Tower Of Power,” “Back to Oakland,” and “Urban Renewal” established their reputation on record as well as defining their dynamic live performances.

Though Tower of Power followed Urban Renewal with two more albums for Warner Bros. and three for Columbia through 1979, they failed to match their early-'70s peak. The band continued its heavy touring pace, but substance abuse began to take a toll on personnel. A faction of the band decided the best approach to sobriety included making an example of someone. That decision, coupled with other factors, led to Prestia becoming the chosen target, and he was fired in 1977. Initially, this turn of events resulted in further substance problems for Rocco. However, he soon began his comeback with bass in hand.

He toured with a Bay Area blues band headed by guitarist Bobby Murray and vocalist Frankie Lee, and he anchored jams with Alberts King and Collins. Following a stint with a Top-40 band, in 1983 an old drummer friend got Rocco a Las Vegas audition in with Lola Falana. He explains, “I was hired because Frank Fiore, the conductor, was a big TOP fan. He knew I couldn't read, and he was nice enough to take me under his wing and teach me the parts.”

Over the years, Prestia ran into various Tower of Power members and even sat in with the band on a number of occasions while Victor Conte and then Vito San Fillipo filled the bass chair. In 1984 call from Castillo with an invitation to rejoin the band took Rocco by complete surprise. After briefly weighing his options and obligations in Vegas, he consented. “It was a very natural reunion; I felt like I'd returned home.” Actually, the band soon relocated from the Bay Area to Los Angeles. In 1987, they released “Power” on Cypress/A&M, which produced the hit (and the band's lone video) “Credit,” a half-time shuffle driven by Rocco's double-time bass line.

With everyone back on the same page, TOP began the '90s by signing a multi-album deal with Epic, triggering its most successful period since the early '70s. The band's first three Epic releases (Monster on a Leash, T.O.P., and Souled Out) added such standards to the repertoire as “A Little Knowledge (Is a Dangerous Thing),” “Believe It” (co-written by Prestia), “Attitude Dance,” “Soul with a Capital 'S',” and “Diggin' on James Brown.”

Diagnosed with severe liver failure and in need of a transplant in 2002, the bass and music community came to his aid. The outpouring of support during his illness by friends and fans alike started the Rocco Prestia Medical Fund making his operation and recovery possible.

In his own words, “I'm proud I've had a vehicle like Tower of Power to develop a personal style. A lot of cats - great players - never get that chance. They bounce around bands and sessions; they don't have the opportunity to cultivate a sound. So it’s been an honor and a privilege to be able to grow as an artist, as a player, in this band. Thank God I happened to be in the right place at just the right time.” 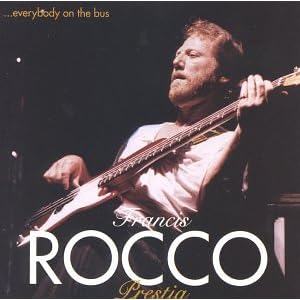 Everybody on the Bus

All About Jazz musician pages are maintained by musicians, publicists and trusted members like you. Interested? Tell us why you would like to improve the Rocco Prestia musician page.