Roger Noyes is a cross-genre guitarist whose playing is rooted primarily in blues-oriented forms. He currently writes and performs with the Arch Stanton Quartet, whose music finds influence in post-bop jazz, but he also performs with groups specializing in other genres, from straight-ahead jazz to barroom/roots rock. His instrumental writing and playing, in particular, are inspired by the likes of Thelonious Monk, Frank Zappa, John Scofield, Nels Cline, Grant Green, Neil Young and Danny Gatton: musicians who are genre-bending, take an “unusual” approach to harmony, and/or have a strong blues-soul sensibility. In addition to guitar, he also plays bass and pedal steel. He can be heard on recent recordings by Dan Johnson and the Expert Sidemen (”Sleep on the Way”), Grainbelt (”A Distant Sound”) and on the Arch Stanton Quartet's debut album (”Along For The Ride”).

Arch Stanton Quartet Releases Debut Album "Along For The Ride"

”If guitarist Roger Noyes played in the Wes Montgomery/Pat Martino mode, he could pick up the role, but that’s not Noyes’ style: Even though his solo conforms to the Montgomery form, Noyes’ sound has a pack of Rottweilers living inside it, with sharp teeth and Rebar-strength muscle.” (J Hunter Review of Arch Stanton Quartet's Along For the Ride on nippertown.com) 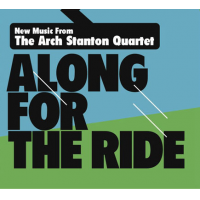 Along For The Ride

From: Along For The Ride
By Roger Noyes

All About Jazz musician pages are maintained by musicians, publicists and trusted members like you. Interested? Tell us why you would like to improve the Roger Noyes musician page.