One of the most prestigious pianists of the past 40 years and yet one of those essential contributors to the puzzle of jazz history who has not received due recognition. It seems “Ronnie Mathews” would be more a household name than it is, for his lofty investment into jazz. According to the New York Daily News, “Ronnie Mathews (is) another stalwart figure who has yet to receive the proper recognition.” His years of touring and his many albums, both as leader and sideman, are overwhelming in number. Critics have showered accolaides upon his name and affectionately compare him to fellow pianists Thelonious Monk and Bud Powell, with a sprinkle of McCoy Tyner. Not that Ronnie ever imitated them, but rather, that he is in league with these jazz greats.

In his twenties, Ronnie was already an accomplished player who toured internationally and recorded with the likes of Max Roach, Freddie Hubbard and Roy Haynes. He was also a member of Art Blakey's Jazz Messengers in the late 1950's through the 60's. By thirty, he began teaching jazz piano and led workshops, clinics and masterclasses at Long Island University in New York City. Besides Dexter Gordon and Clark Terry, he toured and recorded on two Louis Hayes projects in the 70's (i.e. the Louis Hayes-Woody Shaw Quintet and the Louis Hayes-Junior Cook Quintet). Of the three Louis Hayes recordings that features Ronnie, his original compositions can be heard on “The Real Thing” (Muse).

One of the highlights of his career and longest associations, was with the Johnny Griffin Quartet. In Ronnie's own words, “This was a very, very special group.” For almost five years (1978-1982) he was an integral part of Johnny Griffin's Quartet and forged lasting relationships with Johnny, Kenny Washington (drums) and Ray Drummond (bass). The New York Times describes Ronnie as “a constant and provocative challenge to Mr. Griffin...(he) is the energizer of the group...” Never getting enough of a good thing, Ronnie boasts of a possible reunion of the quartet sometime soon. One of the few Johnny Griffin recordings that features Ronnie's original compositions is “To the Ladies”(Galaxy).

In the 80's, Mathews began honing his role as a front man. He performed as a leader in duo, trio and quartet configurations around the world (from New York City to Genova, to the North Sea Jazz Festival in Holland, and more). He also toured with Freddie Hubbard and Dizzy Gillespie's United Nations Band. One sign of his broad scope of talent and musical amiability, is his position as pianist for the Tony Award winning Broadway musical, “Black and Blue” in 1989. And Broadway wasn't his only cross-media project; In 1990, Mathews was one of the artists who recorded on Spike Lee's movie, “Mo' Better Blues.”

After a stint touring and recording with Clifford Jordan Big Band in the early 90's, Ronnie joined T.S. Monk, Jr. for eight years of touring and recording. Gleaming reviews of the T.S. Monk Band never failed to complement Mathews. Chicago Tribune considered Ronnie “the soul of the band... who's angular romanticism provides the horn players with a lush, spicy foundation...” Three CDs have been recorded with the T.S. Monk, Jr. Band. T.S. Monk's “Charm” is one recording that has Ronnie Mathews' offerings on it.

To date, Ronnie tours extensively both as a leader and sideman, and can be found at any one of the major festivals across the globe. Mathews is a well-seasoned composer and does master classes and clinics whenever the opportunity arises. He is looking forward to the 1999 publication of his book, “Easy Piano of Thelonious Monk”, through Hal Leonard Books. This compilation of Ronnie Mathews' arrangements is Thelonious Monk tunes made easy, for students of the piano. He hopes to continue on an educational path by doing clinics in connection with the book. New recordings featuring Mathews sprout like spring blooms. A fresh new recording will be released in the coming months starring a talented quartet of musicians who all live on Sterling Place in Park Slope, Brooklyn. (Who can resist a project when Vincent Herring (sax), Carl Allen (drums), Richie Goods (bass) and Ronnie Mathews all live just doors away from each other?)

Aside from the string of solo recordings done with various labels over the years; Doin' the Thang (1963/Prestige), So Sorry Please (1985/Nilva), Selena's Dance (1988/Timeless), At Cafe des Copains (1989/Sackville), Dark Before the Dawn (1990/DIW), Lament for Love (1992/DIW), Shades of Monk (1995/Sound Hills), etc., Ronnie's playing and compositions can be enjoyed on countless recordings by other musicians; Roy Hargrove's “Family” (1995), Abbey Lincoln's “People In Me”, and Antoine Roney's “Whirling”, to name a few.

Ronnie Mathews is something like Clark Kent: a superhero in disguise! For all he's done, you may not know it was him. Hopefully the oncoming months will bring Ronnie into the spotlight, where the world will acknowledge all he's accomplished! Show less 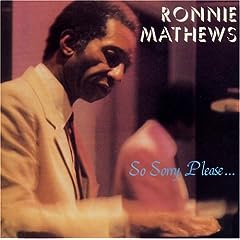 All About Jazz musician pages are maintained by musicians, publicists and trusted members like you. Interested? Tell us why you would like to improve the Ronnie Matthews musician page.