Jazz vocalist Rose Colella currently performs regularly at Chicago's top jazz clubs and hotels, including The Jazz Showcase & The Green Mill, alongside the city's finest jazz musicians. Rose released her critically acclaimed album “Small Hours” in 2009 and just released her new album “Cocktail” to rave reviews. Rose received her Bachelor of Music degree in Jazz Studies from Roosevelt University in Chicago and owns the entertainment agency Lola Bard Productions, named for her grandmother, a 1930s vocalist who performed and recorded with Bobby Hackett & The Original Dixieland Jazz Band. Rose & Lola were recently featured in The New York Times, with a story detailing Rose’s career as a jazz vocalist in Chicago, inspired by Lola’s career as a jazz vocalist in New York City. Lola Bard Productions books jazz, classical and holiday entertainment at Chicago's finest establishments, along with weddings, corporate events and private parties.

In addition to performing, Rose has recently taught jazz master classes at Northwestern University & Roosevelt University. She also holds the positions of Director of Music at The School of Performing Arts, as well as Assistant Head of the Music Department at The Chicago Academy for the Arts, where she teaches Jazz Voice & Piano. 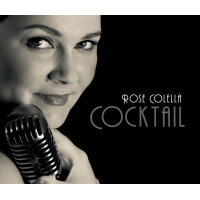 All About Jazz musician pages are maintained by musicians, publicists and trusted members like you. Interested? Tell us why you would like to improve the Rose Colella musician page.