Russell Garcia, the composer, conductor and arranger renowned for his stellar collaborations with Duke Ellington, Stan Kenton, Anita O'Day, Ella Fitzgerald, Louis Armstrong, Judy Garland, Frances Faye, Mel Tormé, Frank Sinatra and numerous others as well as film scores for George Pal's “The Time Machine” and “Atlantis: The Lost Continent” and his orchestrations for Charlie Chaplin's “Limelight,” died Sunday, November 20, 2011. He passed away peacefully at his home in Kerikeri, New Zealand, with Gina Mauriello Garcia, his lyricist and wife of 59 years, by his side. He was 95.

Mr. Garcia, who was fondly known as “Uncle Russell” by his much-younger musical collaborators around the world, was scheduled to continue his 95th birthday celebration during a three-city U. S. tour at jazz clubs in Los Angeles (Catalina's), Oakland (Yoshi's) and New York City (Iridium), but he suffered collapsed vertebrae the week before he was set to travel. Instead, the Los Angeles concert was cancelled and his tour partners, Ms. Rainbolt and Ms. Genecco, paid tribute to Mr. Garcia and his music at Yoshi's on November 1 and at Iridium on November 6. The Garcias enjoyed the Oakland concert via Skype while the New York celebration was streamed live, with Mr. Garcia and his wife commenting on the music and musicianship throughout both evenings. “It's hard to believe that we're sitting here in New Zealand on Monday afternoon taking part in a live concert in New York on Sunday evening,” Mr. Garcia said about the technology of live stream.

Russell Garcia was born April 12, 1916, in Oakland, CA. Throughout his career, he provided arrangements for many singers and instrumentalists and recorded more than 60 albums under his own name. In addition, his book, The Professional Arranger-Composer, has been a valued tool for both beginners and veterans since it was written in the mid-'40's. When describing the orchestral sounds that emerged from the West Coast jazz scene during the 1950's, the name Russell Garcia always comes to mind. In 2007, Mr. Garcia entrusted Ms. Rainbolt to record the first-ever album of all Garcia originals entitled Charmed Life. Arranged by Mr. Garcia for his signature four-trombone band, this collaboration included a U.S. tour and garnered two MAC (Manhattan Association of Cabarets and Clubs) Awards for Best Jazz Recording (Charmed Life) and Best Song (I Remember, Music by Garcia and Lyrics by Rainbolt & Garcia.) A top seller on CDBaby, the album also was chosen by TalkinBroadway.com as one of their Top 10 CDs of 2008.

In 2009, Mr. and Mrs. Garcia were awarded The New Zealand Order of Merit from the Queen of England for their Service to Music. They have been residents of Kerikeri, New Zealand since 1971, but continued to work and make music around the world.

In an article for The New York City Jazz Record (November 2011), Andy Velez wrote: Asked what he wants people to know about him, Garcia smiles at Gina, his wife of 59 years. A World War II veteran of the Battle of the Bulge, Garcia vowed if he ever got out of it alive, he was going to search for answers because “this is absolute insanity, people shooting at strangers.” It was that search which led him and Gina to the Baha'i faith and then ultimately to living in New Zealand since 1971. ...”Every action, every motive has got to be a buildup for a better, beautiful, happy, peaceful world for all mankind. We see mankind as one. So any goal that is not to help everybody is not a good goal.”

In addition to his wife Gina, whom he married 60 years ago on December 24; Mr. Garcia is survived by his daughter and son-in-law Judy and Henry Kulp of California; four grandchildren, Kristy Corwin-Dupont, Sean Lurie and Melody Kulp-Reinstein of California and Donny Kulp of Hawaii; and seven great grandchildren, Curtis Corwin, Capri Corwin, Kaden Lurie, Collis Lurie, James Reinstein, Lila Reinstein and Ginger Mancia-Kulp, all of California. Mr. Garcia was preceded in death by his son, David Garcia, in 2007. Show less

Russ Garcia Unable to Travel to U.S., but 95th Birthday Concerts Go On! 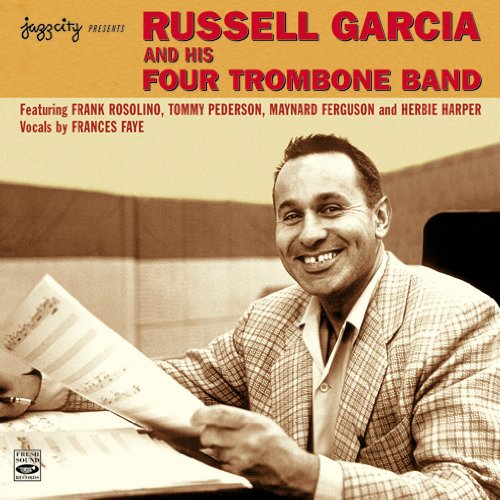 
I Lead A Charmed Life

All About Jazz musician pages are maintained by musicians, publicists and trusted members like you. Interested? Tell us why you would like to improve the Russell Garcia musician page.