Russ Kaplan is a musical storyteller. A creatively restless composer and versatile keyboardist, his diverse musical obsessions have led him through the worlds of jazz, rock, and theatre music. His newest project is a band that brings all these elements seamlessly together - a postmodern jazz supergroup known simply as “Russ Kaplan + 7.” Taking Jazz into a high-concept narrative realm, RK+7 tells fantastic stories through Kaplan’s evocative compositions, which draw on influences from dixieland jazz to ambient rock.

Kaplan's debut album as a bandleader - The Ulysses Cycle - is a 20-song narrative suite based on Homer's Odyssey. Russ had been searching for a story to musicalize that would allow him to compose in all of the eclectic styles that fascinate him, and which captures the ideals he loves best about playing jazz: spontaneity, excitement, thinking on your feet. The Odyssey, which tells the tale of a cunning hero traveling through exotic lands as he struggles home from war, was clearly the perfect fit. 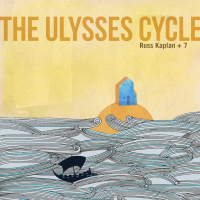 All About Jazz musician pages are maintained by musicians, publicists and trusted members like you. Interested? Tell us why you would like to improve the Russ Kaplan musician page.