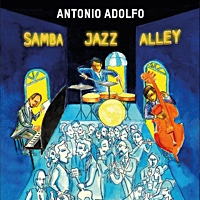 Rio de Janeiro native Antonio Adolfo was just a teenager in the early 1960s when he became part of the bossa nova revolution that was sweeping Brazil and the rest of the world. Not content to spend most of his career backing vocalists, the pianist and many of his peers began crafting a more rhythmically robust instrumental interpretation of the lithe and flirtatious bossa. Influenced by the Bebop, Soul Jazz and West Coast trends that ruled the day in the U.S., the potent result was coined “Samba Jazz.” The movement experienced a surge of popularity thanks to the emergence of such soon-to-be-famous artists as Sérgio Mendes, Moacir Santos, The Tamba Trio, Elis Regina, Leny Andrade, Raul de Souza and… Antonio Adolfo. Samba Jazz Alley is the latest chapter in a series of releases on Adolfo’s AAM label that have explored a wide range of stylistic variants of Brazilian music. The session’s title refers to an obscure dead-end alley in the heart of Rio’s storied Copacabana neighborhood that served as a breeding ground for the city’s up-and- coming instrumentalists and singers during the heyday of bossa nova. The alley was termed Beco das Garrafas (Bottles Alley) because residents of neighboring apartments would shower the tiny space with beer bottles to protest the early morning racket produced by Bohemian revelers and impromptu jam sessions. Bottles Bar, the alleyway’s main venue, is reputed to have showcased over 100 of Brazil’s most noted musicians and vocalists of the day. The budding pianist and composer recalls taking a bus with his 3D Trio companions to perform a set at the bar in 1964. “It’s impossible to know how many tunes that became standards were first performed there,” he states. “Bottles Bar was like a ‘notable peoples’ club!” On Samba Jazz Alley, Adolfo has the luxury of performing with a core ensemble that features the talents of some of the best Brazilian jazz musicians of their generation. The three-horn frontline of trumpeter Jessé Sadoc, woodwind artist Marcelo Martins and trombonist Rafael Rocha provides a muscular ensemble sound that’s perfect for this hard-hitting genre. Joining Adolfo in the rhythm section is an equally distinguished crew, including guitarist Lula Galvão, bassist Jorge Helder, drummer Rafael Barata, and percussionist Dada Costa. The session’s nine tracks capture the vivacious character of Samba Jazz via Adolfo’s ingenious arrangements of songs by Antonio Carlos Jobim (“Corcovado” and “Passarim”), Johnny Alf (“Céu E Mar”), Edu Lobo (“Casa Forte”), Baden Powell (“Só Por Amor”), João Donato (“The Frog”), and two themes by the leader (“Obrigado” and “Hello, Herbie,” a tribute to Herbie Hancock). A particularly mesmerizing take is the gorgeous bossa ballad “Tristeza De Nos Dois” (The Sadness of the Two of Us), featuring one of the song’s three co- composers, the legendary harmonica player Maurício Einhorn, in the company of Gabriel Grossi, Brazil’s current harmonica sensation. Samba Jazz Alley is another triumph for Antonio Adolfo and a landmark recording in the still evolving Samba Jazz movement.: Mark Holston Antonio Adolfo “Samba Jazz Alley” (AAM Music AAM 0713) Street Date: 07/29/2019 Piano And Arrangements: Antonio Adolfo; Acoustic And Electric Guitars: Lula Galvao; Double Bass: Jorge Helder; Drums: Rafael Barata; Percussion: Dada Costa And Rafael Barata (Tracks 2, 6;, Bl Trumpet: Jesse Sadoc; Flugelhorn: Jesse Sadoc (Track 9]; Soprano, Tenor Saxes: Marcelo Martins; Alto Flute: Marcelo Martins (Track 9); Trombone: Rafael Rocha. Special Guests: Valve Trombone: Serginho Trombone (Track 6]; Harmonicas: Mauricio Einhorn And Gabriel Grossi (Track 5]; Shaker: Claudio Spiewak (Tracks 1, 5 And Bl; Acoustic Guitar: Claudio Spiewak (Track 1]. UPC CODE: 194171135835 http://antonioadolfomusic.com http://aammusic.com Available From: •Amazon •CDBaby •iTunes

All About Jazz musician pages are maintained by musicians, publicists and trusted members like you. Interested? Tell us why you would like to improve the Samba Jazz Alley musician page.