Sam made his discovery of Jazz at age 9 and began studying saxophone shortly thereafter. He played his first gig when he was 14 years old with legendary trombonist Al Grey and never looked back. As well as leading his own groups, Sam has had the honor of performing with The Joe Chambers “Moving Pictures” Jazz Orchestra, The Smoke Big Band, The Artie Shaw Jazz Orchestra, The Cecilia Coleman Big Band and The Paris Wight Quintet featuring David Weiss. In addition, Sam is currently composing and arranging music for his first CD. He has gained great knowledge and experience by learning, performing and/or recording with some of the worlds finest musicians including Roger Humphries, Jimmy Cobb, Randy Brecker, John Riley, Bob Mintzer, Ralph Lalama, Ray Vega, David Hazeltine, John Fedchock, Jim Snidero, and Eric Alexander.

Sam has also been teaching music for over 8 years. His private teaching studio includes students of all ages and levels on saxophone, clarinet and flute. Sam’s students cover all areas of study from classical repertoire to jazz improvising. Sam has also conducted several instrumental master classes and workshops for schools and summer programs including The North Shore High School Jazz Band and Combo, The Great Neck North High School Band and Orchestra and The Oyster Bay High School Jazz Band. In addition, Sam has been a woodwind teacher for The All Island Music Center for the past three years. Previously he has taught for The Tarrytown Music Works Program, The Hackley School Music Conservatory, The Laconia Music Center, Catalano’s Music Center and Hey Joe Guitar. Sam was also part of the 2011 Vandoren sponsored “generation artists” program.

Sam has appeared on television several times with Vince Giordano and The Nighthawks. He was on HBO two times in Martin Scorsese’s T.V. Series “Boardwalk Empire” playing clarinet, and most recently for USA in “Royal Pains” playing saxophone. Additionally, Sam recorded at Bennett Studios with the Dan Jameson Big Band featuring John Riley, and also recorded and performed with The Ted Piltzecker Group featuring Harvie S., Rogerio Boccato, and Jerad Lippi. The newly released CD “Ted Piltzecker & Company” can be purchased on ITunes. Sam was a finalist in the first Generations Jazz Competition held at Yoshi’s Club in San Francisco. He has played live on WBGO Jazz 88.3 FM with the Purchase Jazz Endeavor three times. In 2008 Ray Vega included Sam in an “all star youth” group that performed at the Cape May Jazz Festival.

Additional big bands, funk bands, pit bands and orchestras that Sam has developed a relationship with include The Big Apple Circus, The Josh Schneider “Easy Bake” Orchestra, The Howard Williams Jazz Orchestra, The David White Jazz Orchestra, The Joe Battaglia New York Big Band, The Swing Time Big Band, Lou Caputo’s Not So Big Band, New York’s Most Dangerous Big Band, Give it One (Maynard Ferguson Tribute Band), The Mike Rubenstein Jazz Orchestra, Soul Be It, Sound of Infinity and Nocturne. Sam has also played with the house band behind the “Brooklyn Reunion” featuring legendary groups such as the “Classics”.

As a student, Sam had the honor of participating in several outstanding music programs and schools around the country. In 2002, Sam received a scholarship to attend the University of Miami Jazz Program, where he studied with Gary Keller. Sam completed his bachelor’s degree at SUNY Purchase College where he studied with Jon Faddis, Ray Vega, Todd Coolman, Steve Wilson and Ralph Lalama. Sam continued his studies at SUNY Purchase College where he studied with Eric Alexander, receiving his Masters Degree in Jazz Performance in 2009. Sam wrote his Master’s Thesis on solo construction and development. Before and during high school Sam participated in several outstanding music programs including USDAN, The C.W. Post Jazz program, The Skidmore Jazz Camp, The Vermont Jazz Center Workshop and The Friends of the Arts Jazz Program. Sam was selected into the Nassau All County Jazz Band for four years, New York All State Jazz two years in a row, and was first alternate for the All National Jazz Ensemble. In his junior year, Sam was a featured soloist with his high school orchestra at Carnegie Hall. In addition, he participated in the Nassau-Suffolk Jazz program for four years successively. Show less 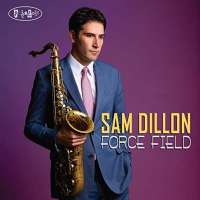 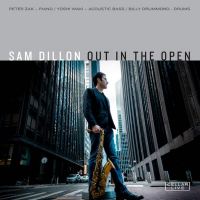 Out in the Open

All About Jazz musician pages are maintained by musicians, publicists and trusted members like you. Interested? Tell us why you would like to improve the Sam Dillon musician page.