Born on March 26th 1992 in Medellin Colombia, Santiago is a passionate musician whose first obsession is jazz.

From a very early age, he was immersed into the basics of music and was always surrounded by musicians; his brother was his first inspiration and supporter.

At age 14 he was already studying Drums under the guidance of Carlos Garcia. In 2009, Santiago started his professional undergraduate in Music at EAFIT University (Medellin) and strengthened his learning process with the Colombian drummer Juan Fernando Montoya. Most significantly, he had the opportunity to learn from the great jazz drummer Ari Hoenig.

In his short but intense career, Santiago has enjoyed the pleasure to play with talented musicians in Gigs, Jam Sessions, Master Classes such as Joel Frahm,John McNeil,Mike Fahie, Sam Farley, Samuel Torres, Brandon Bernstein, Winard Harper, among others. He has also been part of Jazz bands like Juancho Lopera Trio, Rodrigo Alvarado Quartet, Daniel Tamayo Quartet.

Santiago has participated in Jazz festivals in Medellin and played in various jazz clubs in New York City . 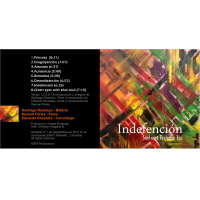 All About Jazz musician pages are maintained by musicians, publicists and trusted members like you. Interested? Tell us why you would like to improve the Santiago Restrepo musician page.