Before making the double bass her instrument of choice, Sarah Murcia studied the piano (first at the CNR in Boulogne, then with François Bou), and the cello for a number of years. She began her apprenticeship in the classes of improvised music given by Manuel and Patricio Villaroel, later becoming a student of Jean-François Jenny-Clark. She obtained a degree in musicology at the Sorbonne and was awarded a prize in orchestration by the Schola Cantorum.

For the last ten years she has played with the Magic Malik Orchestra, and Las Ondas Marteles (Nicolas et Seb Martel).

At the moment she is a member of the groups Beau Catcheur (duo with Fred Poulet), Sylvain Cathala trio (with Sylvain Cathala et Christophe Lavergne), and Pearls of Swines (with Fred Galiay, Franck Vaillant, Gilles Coronado).

In 2001, she founded the group Caroline with drummer Franck Vaillant, guitarist Gilles Coronado and saxophonist Olivier Py. Saxophonist Guillaume Orti was added in 2012.

As an arranger, she is involved in various projects, particularly Paul Ouazon’s music programs for television and the research atelier of Arte France.

In 2011, Sarah Murcia and Kamilya Jubran initiated the project Nhaoul’, adding three musicians to their original duo (violin, viola , cello), and in 2013 they launched the project Wasl, a trio with Werner Hasler (trumpet et electronics).

Sarah Murcia also composes music for the cinema and the dance. In 2012 she became musical director for “Baron Samedi”, the new creation of choreographer Alain Buffard, and presents also “Everybody”, a duo with the choreographer and danser Mark Tompkins.

In 2012, she does a one year artist in residency at the “Dynamo de Banlieues Bleues” and presents several projects (Caroline and Guillaume Orti, Nhaoul, her solo, as well as a teaching project at the Paul Eluard highschool in Saint Denis, and a creation with BOA and Beau Catcheur).

In 2014 is an artist in resdence at the Triton for a certain number of projects and cartes blanches (Beau Catcheur, a duo with Magic Malik, Caroline and Guillaume Orti, as well as a teaching project with Peter and the wolf for 4 vintage synthesizers).

2015 will be the occasion for two new creations : “Never Mind the future”, over the Sex Pistols’ album, with Caroline, Benoit Delbecq and Mark Tompkins ; as well as “Nhaoul/Habka”, with Kamiilya Jubran and three new musicians (Régis Huby - violin ; Guillaume Roy - Alto ; and Atsushi Sakaï - cello).

In 2017, She forms a new quartet, Eyeballing, with Benoit Delbecq, Olivier Py and François Thuillier and composes Extra, commissioned by Anne Montaron for the radio show Alla Breve at France Musique. Associate artist for the festival Jazzèbre in Perpignan, she presents most of her current projects and also a pedagogic project.

She also tours with Rodolphe Burger.

In 2018, she performs with the Louis Sclavis quartet, Characters on the wall, with Benjamin Moussay and Christophe Lavergne ; Habka with Kamilya Jubran ; and tours with Rodolphe Burger and her quartets Eyeballing and Caroline. She arranges 12 versions of My Favorite Things for Arte Live Web in collaboration with Paul Ouazan. In residency at the Atelier du Plateau for the season 2018/2019, she also pilots cultural and pedagogic actions for the Dynamo and the MAAD 93.

In 2019, she creates the performance My Mother Is A Fish, after the novel As I Lay Dying by William Faulkner, with her quartet Caroline, Mark Tompkins and Benoit Delbecq. Beau Catcheur, her duo with Fred Poulet, creates la performance Pas d’amusement, (No Fun), that revisits the music of the Stooges. In 2020, she becomes Associate Artist of the Scène Nationale de Chambéry / Espace Malraux, she multiplies her pedagogic and artistic projects, notably with Fanny de Chaillé, equally associate artist. They are preparing a performance around Lou Reed’s album Transformer.

Currently, she is working with a new quintet, co-directed by Sylvaine Hélary, with Elodie Pasquier, Aloïs Benoit and Sébastien Boisseau. With Kamilya Jubran, she is composing a pièce for l’Orchestre Régional de Normandie (creation 2022), and tours with Kamilya Jubran, Rodolphe Burger and Louis Sclavis. Show less 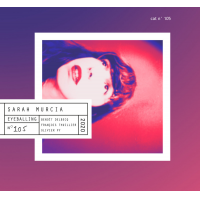 All About Jazz musician pages are maintained by musicians, publicists and trusted members like you. Interested? Tell us why you would like to improve the Sarah Murcia musician page.