Shahzad Ismaily was born to Pakistani immigrant parents and grew up in a wholly bicultural household. While he holds a masters degree in biochemistry from Arizona State University, he is a largely self-taught composer and musician, having mastered the electric and double bass, guitar, banjo, accordion, flute, drums, various percussion instruments and various analog synthesizers and drum machines. Ismaily has recorded or performed with an incredibly diverse assemblage of musicians, including Laurie Anderson and Lou Reed, Tom Waits, Jolie Holland, Laura Veirs, Bonnie Prince Billy, Faun Fables, Secret Chiefs 3, John Zorn, Elysian Fields, Shelley Hirsch, Niobe, Will Oldham, Nels Cline, Mike Doughty (of Soul Coughing), Graham Haynes, David Krakauer, Billy Martin (of Medeski Martin and Wood), Carla Kihlstedt’s Two Foot Yard, the Tin Hat Trio, Raz Mesinai and Burnt Sugar. He has also composed regularly for dance and theater, including for Min Tanaka, the Frankfurt Ballet and the East River Commedia. Recently he composed the score for the critically acclaimed movie Frozen River, which won the Grand Jury Prize at the 2008 Sundance Film Festival. He was also an Artist in Residence at the Headlands Center for the Arts in San Francisco, CA in 2008. Currently based in New York , Ismaily has studied music extensively in Pakistan, India, Turkey, Mexico, Santiago, Japan, Indonesia, Morocco and Iceland. 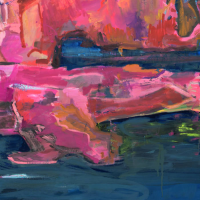 All About Jazz musician pages are maintained by musicians, publicists and trusted members like you. Interested? Tell us why you would like to improve the Shahzad Ismaily musician page.