Shawn Thwaites is a Trinidadian-American musician and educator from Washington, DC. His area of expertise is unique–the steeldrum, a relatively new and underexplored instrument born out of the colonial history of Trinidad and Tobago. His trademark style integrates the very best of his Trinidadian ancestry and his D.C. upbringing, intertwining jazz, hip-hop, funk, calypso, reggae, and more. This distinct sound, along with his coy style of performing, has helped establish Thwaites as a rare and sought after international recording artist, musician, and educator.

Shawn Thwaites is a reputable and versatile steelpan musician and performer. His accomplishments include recordings with notable artists, such as Lauryn Hill, Walter Beasley, and Greg Philliganes. He has toured North America, South America, Africa, Asia, and Europe, bringing his distinct sound to audiences around the world. Thwaites earned his stripes within the steeldrum fraternity performing with several steel orchestras, such as Pan Masters, Moods Pan Groove and Oasis Steel Orchestra. He has carried that torch to some of the world’s most prestigious venues, such as the Kennedy Center and Lincoln Memorial Washington, DC. In 2011, he joined Native Deen, an American Nasheed group, with whom has performed for diverse audiences on five continents. In 2015, he formed the Shawn Thwaites Rebel Quartet.

The Shawn Thwaites Rebel Quartet (STRQ) was born out of an exploratory effort to fuse intricate masterpieces of Caribbean, African, American, and European composers. With the steeldrum at the helm, STRQ is undoubtedly the world’s most eclectic ensemble. As a steeldrum musician, Thwaites’ vision was to compile a cadre of talented musicians in a manner that would authentically present the steel drum and its deeply rooted history, while simultaneously pushing the instrument and culture to uncharted territories. Bringing together elements of jazz, rhythm and blues, hip hop, afro-beat, and calypso, STRQ pushes the limits of innovation, while remaining loyal to authentic world sounds.

With STRQ, Thwaites is actively reviving the birth of cool contemplated by Miles and realized by those who have used this approach as their musical foundation, such as Robert Glasper, Christian Scott, Esperanza Spalding, and Kendrick Lamar.

STRQ’s music is a healer, a weapon, a legal drug. It truly doesn’t get any better. Show less

Read more articles
If you Love the Soul Samba on my @swiftfm account then follow @ShawnThwaites. Great music ahead in your future. ~Quest Love

Shawn Thwaites is a graduate of Berklee College of Music in Boston, MA and has over 15 years of experience in music composition, performance, and education. After completing his undergraduate studies, Thwaites founded Pan United Youth Movement (PUYM), a 501(c)3 non-profit organization that exists to empower underserved youth with essential life skills through music education and performance. Through PUYM, Thwaites has founded two youth steel orchestras: Virginia All Steel Orchestra (VASO) and the Washington National Steel Orchestra (WNSO)

Shawn Thwaites is a graduate of Berklee College of Music in Boston, MA and has over 15 years of experience in music composition, performance, and education. After completing his undergraduate studies, Thwaites founded Pan United Youth Movement (PUYM), a 501(c)3 non-profit organization that exists to empower underserved youth with essential life skills through music education and performance. Through PUYM, Thwaites has founded two youth steel orchestras: Virginia All Steel Orchestra (VASO) and the Washington National Steel Orchestra (WNSO). Under Thwaites’ leadership, VASO and WNSO have taken young musicians, ages 7 and up, to perform throughout the United States. Some of their favorite past performance venues include Disney World and Universal Studios. His students have played for several popular culture icons, like LeBron James, Denzel Washington, Ron Howard, and Ashanti. In 2009, he led a music workshop with Esperanza Spalding at the University of Maryland, featuring PUYM students. In 2010, he formed a partnership with the Boys and Girls Club, the first of its kind, bringing steeldrum education to diverse student populations, many of which had never heard of the steeldrum. In 2016, PUYM will celebrate its 13th anniversary. 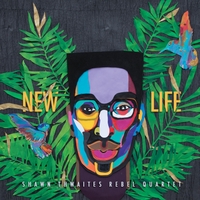 All About Jazz musician pages are maintained by musicians, publicists and trusted members like you. Interested? Tell us why you would like to improve the Shawn Thwaites musician page.