Canadian-born, New York-based singer, alto saxophonist, composer and arranger, Sheila Cooper is -- as saxophone legend Lee Konitz has noted -- “a singer on her horn and with her voice, and that's the best playing for me.” Ever since she moved to New York, she has been wowing audiences at the city's top venues, including the Blue Note, Birdland, The Knitting Factory and Five-Spot.

And her European tours in support of her acclaimed first CD “Since You Were Mine” which featured world-class rhythm section Renee Rosnes, Scott Colley and Billy Drummond were triumphantly successful, playing to enthusiastic audiences in Germany, Austria, Switzerland, France, Czech Republic, Slovenia, Slovakia. “It was so thrilling to have people lining up in the break to have me autograph CDs,” says Cooper. “I was quite overwhelmed by how excited they were.”

Her follow-up CD, “While the World is in Slumber” featuring her trademark quirky, yet elegant renderings of popular standards, also includes two original compositions (one vocal, one instrumental). Her clever additional lyrics to Leonard Bernstein's little-known “100 Easy Ways to Lose a Man” wittily personalize and update a 50's gem. And her fresh, sexy voice is beautifully showcased by her imaginative and seductive arrangements of the songs, “In the Still of the Night” -- a line from which inspired the CD's title -- “Cry Me a River” and “It's All Right With Me.”

Like fellow-Canadian Diana Krall, Cooper is as acclaimed an instrumentalist as she is a singer. “A lot of people tell me they find it inspiring to see a woman saxophonist who can really play. And it's not just young women; older women are really psyched too, and 30- year-old guys are really psyched!” she laughs. As Steve Starger of The Hartford Advocate pointed out: “Cooper has a clear, slightly sassy voice that fits well with her material. Her alto playing is crisp and assured; she isn't afraid to enter dark musical places when the mood calls for it. ... It's a pleasure to report that the quality of Canadian imports is still high.”

Add to her impressive list of talents, Sheila's producing skills. As well as her own CDs she has co-produced on a number of recordings for other musicians -- including “Reinventing the World”(Intuition Music & Media) featuring Andy Middleton and Kenny Wheeler, on which she also plays, and “Nomad's Notebook” (Intuition Music & Media), featuring Andy Middleton, Ralph Towner, and Dave Holland. Other recent recording credits include alto saxophone and flute on the NewYorkestra's “Urban Soundscapes” CD of cutting edge big band jazz, set for release autumn 2003. 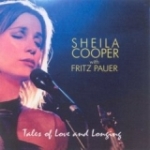 Tales of Love and...

Tales of Love and...

All About Jazz musician pages are maintained by musicians, publicists and trusted members like you. Interested? Tell us why you would like to improve the Sheila Cooper musician page.