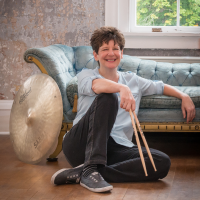 From the drum set Sherrie leads The DIVA Jazz Orchestra, her quintet FIVE PLAY and co-leads the 3Divas. From Carnegie Hall, she performs with The New York Pops and from celebrated stages everywhere, she is music director and drummer for Broadway star Maurice Hines. Sherrie is also a busy freelance performer and a published composer/arranger.

With her bands Sherrie has performed at many of the world’s most acclaimed music venues and festivals; from Lincoln Center to the Kennedy Center and the Hollywood Bowl, to Jazz Festivals in Germany, Switzerland, France, Portugal, Ireland, England, Croatia, Japan, Vietnam and Israel and beyond. Additionally, DIVA was featured at the 2017 NEA Jazz Master’s Awards Ceremony, the soundtrack for the NBC-Macy’s Fireworks Spectacular; on CBS Sunday Morning with Charles Osgood, on TCM’s televised broadcast of the 25th Anniversary of the Kennedy Center and NHK Japan’s New York Jazz. The band also co-stars in the award-winning documentary film The Girls in the Band.

Sherrie has received several awards and honors which include a 2014 Ovation award for “Best Music Direction” in Tappin Through Life; the 2009 Mary Lou Williams-Kennedy Center Lifetime Achievement Award, a 2013 State Department grant for FIVE PLAY to tour Vietnam, a tour grant from Arts International, The Kennedy Center Alliance Award for Outstanding Achievements in the Arts, a grant from Meet the Composer, a Doctoral Fellowship from New York University, the New York City Music Educator’s Award for Outstanding Contributions to Education and was twice selected New York University “Music Teacher of the Year.”

As an educator, Sherrie runs a private drum set and percussion studio. She is also a clinician for Yamaha Drums, Sabian Cymbals, Aquarian Drum Heads and Vic Firth Drum Sticks. On a national level, she has served as guest conductor, soloist and adjudicator for many collegiate and high school jazz and All-State festivals. Sherrie also created and directs Musical Magic, a hospital outreach program for The Ronald McDonald House – New York.

Please visit Sherrie and her bands on their websites and all major social media outlets.

“[Sherrie Maricle] has always had the power to burn, but during her years in New York she has developed the subtle side of her technique, employing dynamics to whisper as well as roar…”Binghamton Press

“[Sherrie Maricle] has always had the power to burn, but during her years in New York she has developed the subtle side of her technique, employing dynamics to whisper as well as roar…”Binghamton Press

“Thanks for Burt Korall’s well-written and much-deserved feature article about Sherrie Maricle [December ’03 MD]. As one can clearly determine from the article, Sherrie is an extremely hard-working drummer on and off the stage. She transforms this work ethic into a very dynamic stage performance.

Several years ago, Sherrie worked with high school musicians at a three-day jazz festival sponsored by our local community college. The culmination of this festival was a concert by Sherrie’s band, DIVA. Sherrie’s performance as a drummer was commanding, but equally impressive was her ability to get the most out [of] these young high school musicians. She is not only anaccomplished musician, but also a gifted educator and role model.” Scott A. Bell, Mason City, IA

Phd from New York University. Teacher of the year in 1997 and 2000 at NYU. Have a home studio with double drum sets.

All About Jazz musician pages are maintained by musicians, publicists and trusted members like you. Interested? Tell us why you would like to improve the Sherrie Maricle musician page.