Shirley Horn remembered playing her grandmother's piano when she was four years old. Uninterested in playing with the neighborhood children, Horn enjoyed nothing more than to play that piano, and would close herself off in her grandmother's parlor, which was kept for guests and was chillier than the rest of the house. After several years of this, her mother, who admired classical music, enrolled the girl in piano lessons. Shirley was surrounded by music in her family, and admitted that the majority of the songs in her repertoire are those she heard while she was growing up, in Washington D.C. She played with a choir, at Sunday school, and won a talent contest and 13-week radio engagement at age 13. Horn studied piano and composition at Howard University Junior School of Music, in Washington, from age 12 to age 18. Though she focused on the piano works of great Western classical composers, it was jazz that eventually captured Horn's fancy. At age 17, Horn began playing in a local restaurant and nightclub. The pianist was forced into singing. “I was very shy and it was hard for me to sing,” Horn said. Realizing she could earn more money as a vocalist, she continued to play piano and to develop her singing and playing skills, and formed her own trio in 1954.

Her marriage at age 21 slowed down her musical career, and Horn performed live only around the Washington, and Baltimore, Maryland areas. She released her first recording, “Embers and Ashes,” on the small Stereo-Craft record label in 1961. The album went mostly unnoticed, but caught the attention of legendary jazz trumpeter Miles Davis, who tracked Horn down and invited her to New York to open for him at the Village Vanguard. Horn and Davis, were drawn together by their very similar approach to music. Both artists are recognized for their use of space, long silences between notes, to create a certain tension, particularly when doing ballads. The style creates a kind of suspense. Though the two diverged musically throughout the 1960s, Davis remained a close friend and mentor of Horn's until his death in 1991.

Horn recorded “Shirley Horn with Horns,” and “Loads of Love,” in 1963 with producer Quincy Jones for Mercury. They wanted Horn to focus on her vocal skills, and had been signed as a vocalist, so a studio musician played piano on the recordings. The arrangement was not right for Horn, who would have preferred to play the music herself.

After her Mercury contract expired in the early 1960s, Horn went into semi-retirement and retreated back to Washington, DC, to raise her daughter. She continued to play live shows locally with her own trio. Though she recorded a few albums during this time, including “Travelin' Light,”(’65) “A Lazy Afternoon,” (’78) “Violets for Your Furs,” (’81) “At Northsea,” (’81) “All Night Long,” (’81) and “Garden of the Blues,” (’84) Horn remained out of the spotlight for the better part of 25 years.

Horn experienced a tremendous surge in her career in the 1980s. The Verve record label signed Horn and her trio to a recording contract in 1986. Horn's comeback with Verve was a live album, “I Thought About You,” recorded at the Vine St. Bar and Grill in Hollywood and released in 1987. The second phase of Horn's career proved to be her most glorious. “Close Enough for Love,” Horn's studio debut for Verve, was released in 1988 and officially marked Horn's return to the jazz limelight. Extensive touring in the United States and abroad at prestigious jazz venues consolidated her growing popularity, and Horn's Paris and Carnegie Hall debuts, both in 1991, were proof that Horn was back and better than ever.

Shirley Horn and Miles Davis appeared together again on her 1990 Verve release, “You Won't Forget Me.” Davis played trumpet alongside guests Wynton and Branford Marsalis.

In 1992, she worked with composer-arranger Johnny Mandel on the album “Here's to Life,” which spent 16 weeks at No. 1 on the Billboard jazz chart. Mandel won a Best Arrangement Grammy award for his work on the recording. Two of her other albums, “I Love You, Paris” (1992) and “Light Out of Darkness (A Tribute to Ray Charles)” (1993), also reached No. 1.

In 1995 Horn was getting back to the old days of jazz to record an upcoming album, “The Main Ingredient.” Rather than record at a studio, Horn convinced Verve to let her do the work in her own home, in the spirit of the old jazz sessions, where musicians would drop by for informal jazz sessions and dinner parties that lasted through the night.

Horn was able to salute her friend and mentor, Miles Davis, on 1998's “I Remember Miles.” Horn took on Davis's renditions of “My Funny Valentine,” “Summertime,” “I've Got Plenty o' Nuttin',” “My Man's Gone Now,” “Basin Street Blues,” and “Blue In Green.” The mood Horn created on the record was so complete, so true to Davis, that the album won a Grammy award for Best Jazz Vocal Performance in 1998.

In addition to her Grammy and seven additional Grammy nominations, Horn received many honors and accolades throughout her career. She was awarded the Mayor's Arts Award for Excellence in an Artistic Discipline in Washington, D.C., in 1987, the Academie Du Jazz's Billie Holiday Award France in 1990, and the Edison Populair HR57 Award for “Here's to Life,” in 1993. She was elected to the Lionel Hampton Hall of Fame in 1996 and was honored by ASCAP in 1998. She received five Wammys, the Washington area's music industry award, and was been voted Number One female vocalist in the New York Jazz Critics Awards and Number One jazz vocalist in Down Beat magazine's Critics' Poll. In 1999 she received the Phineas Newborn, Jr. Award for her lifelong contributions to jazz, similar tributes followed in the coming years, culminating in a 2004 tribute at the Kennedy Center and being honored in 2005 with the nation's top jazz award: National Endowment for the Arts Jazz Master.

One year into the new millennium, at the age of 67, Horn released “You're My Thrill.” A decade after they first worked together, Mandel rejoined Horn as arranger, and Charles Ables and Steve Williams completed Horn's standard trio. After 29 years with Ables and 21 with Williams, Horn treasured her relationship with the two. “It takes time,” she told Down Beat, “to find the right musicians. Sometimes we are so close when we play that we are moving as one. That kind of unity is so rare. It's magic.”

Fittingly her last album is titled “May the Music Never End,” was released in 2003 on Verve, the label with which she was associated with since 1986. Shirley Horn died in 2005 at age 71. She created a unique penetrating style of playing and singing, with an ability to connect with her audience at the most heartfelt level. Show less

Shirley Horn at the 4 Queens 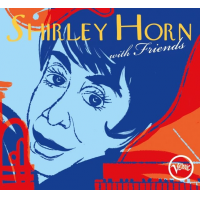 All About Jazz musician pages are maintained by musicians, publicists and trusted members like you. Interested? Tell us why you would like to improve the Shirley Horn musician page.