Vocalist Shoshana Bush grew up in Los Angeles singing American standards and loving Ella and Louis. After graduating from Columbua University with a degree in jazz studies, working with with George Lewis, Christine Correa and Barry Harris, she moved back to LA and spent two years gigging and expanding her repertoire. These years were highlighted by two sold out shows at Catalina Bar and Grill, one in November 2010 and another in August 2011. Shana has now moved back to NYC and is beginning to delve into the city’s vibrant jazz scene. Armored with her West coast sensibility and influenced by Nina Simone, Blossom Dearie, Art Blakey, and Ahmad Jamal, Shoshana chooses songs and creates her arrangements based upon her instincts as a storyteller and her multi-genre love of music.

Bush has a beautifully soft, smoky tone that suits perfectly for the Jobim classic “How Insensitive,” a highlight of the evening...The singer performed with a clear and cool confidence.” Tim Reid - Music Connection

Shoshana Bush can convincingly belt out the blues, as she demonstrated on Nina Simone and Abbey Lincoln's “Blues for Mama,” but can sensitively convey the lyrics on her ballads where her delivery is very conversational in tone and tempo, as she makes the songs a story-telling experience. Shoshana Bush is a developing artist with a bright future.” Les Traub - Cabaret Scenes. 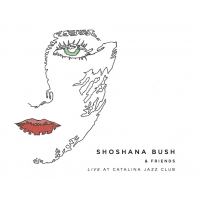 All About Jazz musician pages are maintained by musicians, publicists and trusted members like you. Interested? Tell us why you would like to improve the Shoshana musician page.