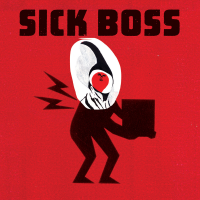 Amadman; Bad Buddhist; Ruthless Waltz; Bug Ya! (Pt.1); They've Got Tombstones In Their Eyes; See You Out There; Mona; Bug Ya! (Pt.2); Troubled

Released May 26, 2017 on Drip Audio. Available for Streaming and Purchase at https://sickboss.bandcamp.com/ All pieces by Cole Schmidt, except Track 1 Schmidt/Gaucher/Meger Track 5 James Meger Track 9 Elizabeth Powell (Songs In The House Of Hassle, 2008) Recorded at The Warehouse, Vancouver, BC, August 27th, 2015 Engineered by Eric Mosher Additional recording at Demitone Studios with Dave Sikula and at Slug Bait Bug Ya! (Pt.1) Recorded on the 388 behind the Lido by Malcolm Jack and at Slug Bait Editing, Processing and Effects by James Meger Mixed by Sandro Perri in Toronto, ON Mastered by Jesse Zubot at The Bunker, Britannia Beach, BC Artwork by Lee Hutzulak Design and Layout by Leisure Thief Tripped out image under the CD by Matt Krysko Letraset text by Malcolm Jack

All About Jazz musician pages are maintained by musicians, publicists and trusted members like you. Interested? Tell us why you would like to improve the SICK BOSS musician page.