Guitarist Simone Gubbiotti is a musician with a strong presence in both the USA and Europe. Based in Umbria (Italy) Simone frequents the US regularly where he performs with musicians including Sid Jacobs, Joe La Barbera, Peter Erskine, Arthur Blythe, Darek Oles, Danny Gottlieb, Adam Nussbaum and Jay Anderson.

Music was not Simone's first passion, he began his career in the world of sport where he played professionally for a number of top Italian soccer clubs including AC Milan. After sustaining a serious knee injury Simone took the decision to refocus and persue a career in music. Simone initially studied jazz guitar locally in his native Italy and later furthered is studies at the Berkly college of Music and the G.I.T in los Angeles. Simone has performed throughout Europe and the United States, both as a sideman and leader, however it is since his signing with New York based label Dot Time records that Simone has started to gain the attention he deserves.

The compositions recorded on this CD mark a milestone in Simone’s career, Simone states in the liner notes “This recording was born out of these reflections and the experiences of my personal journey over the past few years

. It’s dedicated in particular to a wonderful friend who I believe saved my life. Paolo showed me that I can be who I want to be and even though Paolo is no longer with us he was able to teach me the importance of treating life with the right attitude and vision.”

”Gubbiotti’s mellow tone throughout the CD reminds me of some of the early Jim Hall recordings specifically on the waltz “Hope” and the Irving Berlin classic Always. - Johan van Deeg - Jazz In Europe

A beautiful and original voice of the guitar from Simone Gubbiotti. - Jimmy Wyble

Simone is a very dedicated, passionate and talented musician whose musical skills are growing every day, both as a performer and a composer

”Gubbiotti’s mellow tone throughout the CD reminds me of some of the early Jim Hall recordings specifically on the waltz “Hope” and the Irving Berlin classic Always. - Johan van Deeg - Jazz In Europe

A beautiful and original voice of the guitar from Simone Gubbiotti. - Jimmy Wyble

Simone is a very dedicated, passionate and talented musician whose musical skills are growing every day, both as a performer and a composer. - Joe LaBarbera

Simone is a gifted young guitarist and composer. His compositions are beautiful; his sound gives them a voice and his lyrical improvisations tell their story. I always enjoy playing with him and listening to him. - Sid Jacobs

Teacher for "Accademia della chitarra" and member of the Andres Segovia association. Available for individual lessons or group lessons concerning all the aspects of music.Focusing lessons on the development of the students own vision on the guitar and also on various aspects of performance. Hours and rates can be very flexible.

IMPROVISATION CONCEPT -Relashion between chords and scales. Thematic improvisation designed to develop a strong sense of melody and rhythm.Create motivs. Arpeggios. -Be-bop style. Articulation,legato and accents study. Permutations,approaching chord tones,analysis of solos,increasing the jazz vocabulary.Playing in time. -Pentatonics,application in various contests,altered pentatonics. Symmetrical scales. Diminished,augmented,whole tone. How to use chord fragments to improvise. -Intervalic improvisation. Diatonic and chromatic fourths and fifths,licks example,how to create tension. Playing inside/outside. Triad pairs and polychords,how to mix triads for a ultra modern sound. Chromatic improvisation,stretch the imagination. HARMONIC CONCEPT -Basic chord study. Four and five chord voicings,first steps of harmonisation,chord melody. Analysis of the II-V-I major and minor and various chords. Analysis of the structure of the famous standars and style (Bossa Nova,Modal,Swing,Ballad,Blues and Rhythm Changes) -Analysis of the different historical periods and use of chords. How to play in different contests and right chords to use. Walking bass.Intervalic chords.Chords in fourths and in fifths. Polychords and how to reharmonize a standard. Sobstitutions. -How to approach the fingerpicking. The amazing guitar/piano style. Counterpoint,two notes comping,contrary and parallel motion,how to take from classical guitar to use in jazz. Two notes chords,three notes chords. PERSONAL VISION -Chord permutations,new voicings vision and creating hundreds of new chords using the major scale and the melodic minor scale. Use of intervals. -Technique to generate your own arrangments. -Guitar solo. -Development of your own approach on the guitar. 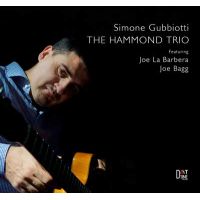 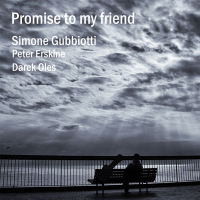 Promise To My Friend

All About Jazz musician pages are maintained by musicians, publicists and trusted members like you. Interested? Tell us why you would like to improve the Simone Gubbiotti musician page.