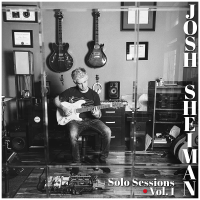 Across The Universe; Nature Boy; The Nearness Of You; Georgia On My Mind; There Is No Greater Love; There Will Never Be Another You; Nobody Knows You When You're Down and Out; Silent Song

Just a few feet away, Sheiman glanced out the window and faced fear and anxiety like so many others. It was March 2020, and across the world so many lives had been greatly impacted by COVID-19. With all of his gigs cancelled, and his son and wife both at high-risk with serious medical conditions, Sheiman looked to find a sense of calmness and peace. Sheiman found this sense of tranquility right in the confines of his study. It is in this room that Josh would practice, record, and mix all 8 tracks of “Solo Sessions Vol. I.” Being in a small room brought back memories to his undergraduate days where he would spend countless hours in tightly-spaced practice rooms working on chord melodies. After listening to his own solo guitar arrangement of “There Will Never Be Another You” from his senior recital 13 years ago, Sheiman embarked on a project to do something he had thought about doing for a long time; recording a solo guitar record. “Solo Sessions Vol. I” is an album of thoughtfully and beautifully constructed chord-melodies. His playing at times resembles Jim Hall with every-note being carefully and methodically placed, giving way to beautiful and sophisticated harmonic and melodic interpretations of standards like “There Will Never Be Another You,” “Georgia On My Mind,” and “The Nearness of You.” The conscious use of space and sophisticated use of effects pedals creates atmospheric guitar that can be heard in the Beatles arrangement of “Across The Universe.”Sheiman also shows the ability to use more traditional be-bop language in his arrangement of “There Is No Greater Love” as well as less- orthodox and percussive elements inspired by virtuoso Tuck Andress in arrangements of “Nature Boy “ and “Nobody Knows You When You’re Down and Out.” The album concludes with his original song titled “Silent Song.” It is a fitting end to the album, as it showcases Sheiman’s unique abilities to combine an eclectic mix of traditional and contemporary influences into something that is beautiful, creative, soulful, and unique. The final song also has a great mixture of sadness and hope, similar to the range of emotions he had when beginning the project back in March of 2020.

All About Jazz musician pages are maintained by musicians, publicists and trusted members like you. Interested? Tell us why you would like to improve the Solo Sessions Vol. I musician page.