Sonu Sangameswaran has been playing electric bass for over a decade now focused on the global sounds of Latin, hip-hop, electronica and African music interwoven with an original sense of groove.

Born in India, raised in the Middle East and currently residing in Australia, Sonu is a completely self taught musician. He also has considerable experience in the fields of instructional design, philosophy of mind and earned himself a Master of Arts in Philosophy of Language.

He recently released his debut album ‘Maximum Sessions Reached’ featuring a global cast of musicians. The album took over 7 years to make. The 25 musicians featured on it are from Senegal, Australia, India, Lebanon, U,K and Sweden. The music was composed and arranged by Sonu with the performers contributing to the overall aesthetic of the album - cinematic, urban and thematic.

He was also featured on respected guitarist and composer, Sanjay Divecha’s album “Secret” which was awarded a 4 star rating on All About Jazz.

As a session and live musician, Sonu has logged credits with very many bands, artists and ensembles in India and Australia. He has performed all over the world and participated in festivals such as Dark Mofo (Tasmania), Kathmandu Jazz Festival, Boogie Festival (Victoria), Bhutan Literary Festival, Brunswick Festival and has been a part of the emerging immigrant community in Melbourne that melts the musics of west African and East African traditions, South America and South-East traditions. 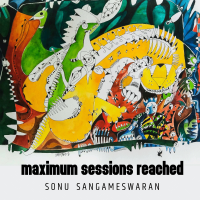 All About Jazz musician pages are maintained by musicians, publicists and trusted members like you. Interested? Tell us why you would like to improve the Sonu Sangameswaran musician page.