Since their arrival in 2000, Spanish Harlem Orchestra (SHO) has established itself as a standard bearer of contemporary Latin music. Directed by world-renowned pianist, arranger, and producer Oscar Hernández, the thirteen-member all-star ensemble has reintroduced the classic sounds of New York City Salsa to music lovers worldwide.

Now in its tenth year, the Spanish Harlem Orchestra is one of the most formidable and authentic Latin jazz combos of today. Yet for all of its appeal with contemporary audiences, the group’s success is actually rooted in the past. A lively and energetic affair, their 2010 release “Viva la Tradición” draws on inspiration from the music’s history and enduring traditions.

From their 2002 debut album, “Un Gran Dia En El Barrio,” SHO revived the classic 1970 NYC sounds with a new hard hitting point-of-view. It launched the band and garnered them a 2003 Grammy nomination for “Best Salsa Album” and a Latin Billboard Award for Salsa Album of the Year-Best New Group.

On their 2004 follow-up, “Across 110th St.,” the Spanish Harlem Orchestra was augmented by the roaring trombones of Jimmy Bosch and Dan Reagan, and special guest Ruben Blades, who Hernández worked for in the 1990s as his musical director. It was slamming and garnered the group its first Grammy Award in 2005 for “Best Salsa Album.”

In 2007 “United We Swing,” placed Spanish Harlem Orchestra among Latin music’s greatest bands by paying due to a neighborhood romanticized in Leonard Bernstein’s “Westside Story” and Ben E. King’s, “A Rose in Spanish Harlem.” El Barrio is a hard urban incubator, which in the midst of social despair has given the world unique Caribbean musical mixtures.

Continuing their commitment to the authenticity of the music, “Viva la Tradición” is very much a nod to the countless artists who helped usher salsa music into the cultural mainstream several decades ago. “Preserving that legacy and introducing it to new audiences in a new century,” says Hernandez, “is more important than being the musical flavor of the month.” 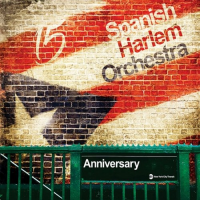 All About Jazz musician pages are maintained by musicians, publicists and trusted members like you. Interested? Tell us why you would like to improve the Spanish Harlem Orchestra musician page.