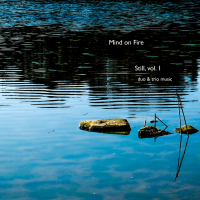 Mind On Fire is the duo project of brothers Brad Gill (vibraphone & percussion) & Sam Gill (saxophones). Since forming in 2017, they have developed a unique approach to blending improvisation and composition, in both duo and expanded formations. On Still Vol. 1, they are joined by three esteemed guest performers: clarinettist Phillippa Murphy-Haste, dizi (Chinese flute) player Chloe Chung, and drummer Chloe Kim. Still Vol. 1 documents compositions that have featured in Mind On Fire’s live sets throughout 2018-19. Two duo works are featured alongside three extended trio pieces, traversing a wide musical terrain that draws on Brad and Sam’s interests in jazz, free improvisation & contemporary classical approaches to music-making. The album’s tracks explore a wide variety of inspirations, including the ancient Benedictine monastic art of Lectio Divina, the ruins of the Indonesian Buddhist temple Borobudur, and the morning bird-calls heard in Sydney’s Inner West.

All About Jazz musician pages are maintained by musicians, publicists and trusted members like you. Interested? Tell us why you would like to improve the Still, Vol. 1: duo & trio music musician page.