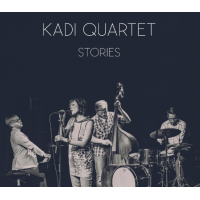 Kadi Quartet strives to bring forth their outlook on what a jazz quartet can be in the 21st century. Rather than solely bathing in the spotlight, in addition to her own adventurous improvisations, Kadi Vija also redefines the role of a jazz singer by creating backgrounds for the other soloists. By combining the catchiness of pop-music, free improvised music and everything in between, Kadi Quartet makes a strong statement of what jazz is today. In september 2012 the band was invited to record for Jatzofrenia, a program by the Finnish Broadcasting Company, introducing young promising acts in the Finnish jazz scene. In 2013 Kadi Quartet won the Finnish Young Nordic Jazz Comets competition and performed at a showcase event held at an annual meeting of the Europen Jazz Network in Trondheim, Norway. Previously the group has performed for example at the Pori Jazz Festival, Jazz­Espa Festival and the Estonian Talve Jazz festival. In the fall of 2013 the ensemble’s career took yet another leap forward, when contemporary saxophone legend Greg Osby took them under his wing by signing them for his Inner Circle Music record label. In Finland the debut album saw daylight on April 11th through Eclipse Music record label. In January 2014 Kadi Quartet was on tour supported by the Finnish Jazz Federation in six cities across Finland, and in July they performed at The European Jazz Competition finals in Rotterdam, Holland.

All About Jazz musician pages are maintained by musicians, publicists and trusted members like you. Interested? Tell us why you would like to improve the Stories musician page.