”Sweet” Sue Terry began her professional playing career at the age of sixteen, playing for church performances and musical theater. She began playing Jazz gigs while attending the Hartt School, a well-known music conservatory in Hartford. Though she was accepted as a Classical clarinetist, her secret agenda was to study with the late Jazz legend Jackie McLean, which she did for five years. The Hartt School elected her Alumna of the Year in 2001.

Sue first heard Jazz music as a child growing up in Connecticut, where her father had an extensive record collection and she listened to WRVR FM non-stop.

As a teenager studying with legendary pianist and educator John Mehegan, Sue mentioned she would like to write a big band arrangement for her high school Jazz Ensemble. Mehegan bet her an ice cream cone that she couldn’t do it. She won.

Her discography currently contains over forty commercially released CDs. She’s the author of several music instruction books, and has received a number of grants and awards for her songwriting. Catch her regular column in the quarterly Jazz Improv Magazine.

Sue’s other passion is for the martial arts---she’s a longtime practitioner of Taiji Quan and Qi Gong.

Her website is www.sueterry.net, where you will find streaming audio, a blog, a photo gallery, and more. When you visit, be sure to drop a line in the “Comments” section. We’d love to hear from you! Show less 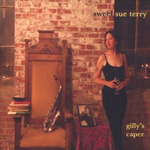 All About Jazz musician pages are maintained by musicians, publicists and trusted members like you. Interested? Tell us why you would like to improve the Sweet Sue Terry musician page.