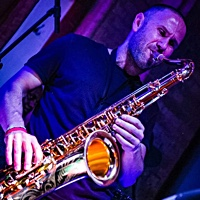 Sylwester builds cultural connections globally with jazz. To date, he has three albums; the latest being In Our Own Way, where he takes on cultural exchange, bringing a fusion of American and Polish jazz, the classical music of Frederic Chopin, and traditional music of Poland and Japan. As an accomplished tenor saxophonist, bandleader, producer, composer and a jazz leader, Sylwester pays tribute to the legacy of David Brubeck’s Quartet trip to Poland, behind the Iron Curtain, in 1958. He is joined on the album with his band, The Jazz Brigade, featuring Freddie Hendrix, Dorota Miśkiewicz, and special guest Darius Brubeck. The fourth song, “In Your Own Sweet Way,” is performed by Darius Brubeck, the oldest son of Dave Brubeck, who accompanied his father on the tour sixty years ago in 1958. The significance of this track confirms that jazz continues to be central to Szczecin, which was labeled “The Jazz Capital of Poland.”

Nationally, Sylwester was recently awarded the title of Honorary Ambassador of Szczecin City, yet his journey to becoming a jazz recording artist and a leader in the world of jazz did not come easy as those who lived in the communist era were deprived of their artistic freedom and expression. Belonging to the communist era Poland, also meant that Sylwester had to begin working earlier, at the age of fifteen, to help support his family. Nevertheless, Sylwester’s dream, inherited from his father and his uncles, was always to be a musician. He attended a music high school with the hope that he would graduate become who he is today. His studies at the Karol Szymanowski Academy of Music in Katowice, Poland a prestigious music university, had to wait and he put his music career on hold by promoting art for the government and community in Szczecin. It was at this time that he became the leading force in the founding of the Szczecin Academy of Art. As a music producer, he became the cultural advisor of to the mayor and City Hall in Szczecin. His break came when he was producing music for Piotr Wojtasik, who offered him a recording session with top American musicians including Newman T. Baker, Wayne Dockery, and Reggie Moore.

Unity: The Gift of Jazz

All About Jazz musician pages are maintained by musicians, publicists and trusted members like you. Interested? Tell us why you would like to improve the Sylwester Ostrowski musician page.