Home » Musicians » Discography » Take Your Clothes Off When You Dance

Take Your Clothes Off When You Dance 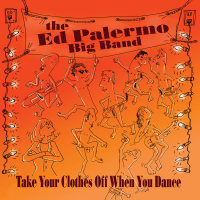 Ed Palermo is a alto sax player and arranger; he has had a big band for twenty-five years, which is an impressive feat in itself, and has had his band performing the music of Frank Zappa for over a decade. Years and years of playing these pieces in front of enthusiastic crowds at a number of venues in New York City and beyond have honed the band’s skills with this difficult material to where they can glide through these charts as if they were butter. There are a number of ensembles performing the music of this great 20th century American composer, but no one does it with this ease, skill and originality; Ed is not afraid to turn a piece into a salsa number (the title track) or to take what was a one minute miniature and to develop it out into a six minute work. The band is a 15 piece ensemble of 6 woodwind players, two trumpeters, three trombonists, two keyboardists, bass and drums, plus a few guests. All of these musicians are NYC professionals, and they have been playing this music for years with Ed, because, like Ed, they recognize and appreciate the genius inherent in the huge body of Zappa's work, and they want to keep this great music alive and in front of the public.

Take Your Clothes Off When You Dance is the Ed Palermo Big Band’s 2nd CD of “Frank Zappa’s astonishingly beautiful and original music” [Palermo], and its 1st release on Cuneiform Records. It features Palermo’s stunning, jazz-oriented arrangements of 8 Zappa tunes (w/ one Jose Madera collaboration). The CD is primarily instrumental; Palermo believes that without lyrics, “the songs are more spacious and have more of a jazz feel;… the humor of Frank’s lyrics remain with the different instrumentations…” Despite the music’s complexity, Palermo’s incredibly skilled 16 piece band and two guest musicians play it with inspiration and apparent ease. A brilliantly original and entertaining big band jazz CD, Take Your Clothes Off When You Dance shows that Zappa’s music has come of age, assimilated into the American songbook. It also reveals that Zappa, as an American rock composer, deserves to be recognized with as much respect as America’s other revered popular music composers, including jazz composers such as Duke Ellington, Charles Mingus, Thelonius Monk, Oliver Nelson, and popular song composers such as George Gershwin and Cole Porter. [Album press release from Cuneiform Records]

"[Palermo's] wisely chosen to emphasize Zappa's early and mid-career work, as that's the music which is more fluid and graceful—and more apt to swing....reveals the lighthearted playfulness and rhythmic intelligence at the core of Zappa's best work..." - Downbeat.

"In arranging Zappa's tunes for big band, Ed Palermo has thrown new light on his legacy while retaining the composer's original melodic and harmonic designs. The arrangements also leave plenty of room for the band's gifted soloists..." - The Washington Post.

Help improve the Take Your Clothes Off When You Dance page

All About Jazz musician pages are maintained by musicians, publicists and trusted members like you. Interested? Tell us why you would like to improve the Take Your Clothes Off When You Dance musician page.