Tal Cohen is a Grammy award winning jazz pianist currently located in Miami. He has received much acclaim including winning the Barry Harris National Piano Competition and was the recipient of the prestigious Freedman Fellowship him performed to a sold out crowd at the Sydney Opera House.

recently, Tal Cohen has been playing around the Globe with Terence Blanchard, Greg Osby, Ignacio Berroa, Joe Lovano and others. he currently leads his own ensemble which has performed at Iconic jazz festivals and venues that include Jazzbez Jazz Festival (Ukraine), Detroit Jazz Festival, Melbourne Jazz Festival (Australia), a three week residency at the Black Cat (San Fransisco).

His most recent album- “Gentle Giants” has received international acclaim and gained him many reviews including a 4 star review from the historic Downbeat Magazine.

Cohens become one of the most in demand pianists as he continues to tour the globe with his unique blend of Jewish melodies, traditional jazz Harmony and an impeccable rhythmic pallet forging a path to be remembered.

“The Tal Cohen Trio manages to combine complex, modern jazz concepts with graceful phrasing, thoughtful development and honest expression. The original ideas, high level of communication and spontaneity of the group is a breath of fresh air and proof that jazz has a bright future” –

Tal winning the Detroit Jazz Festivals 2014 Barry Harris National Piano Competition is testament to the success of this initiative in seeking out truly outstanding voices in the jazz world today. 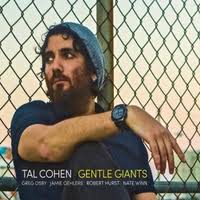 All About Jazz musician pages are maintained by musicians, publicists and trusted members like you. Interested? Tell us why you would like to improve the Tal Cohen musician page.