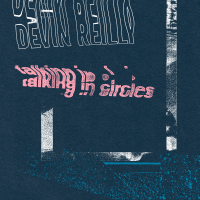 Simple Secrets; Just out of Frame; Undone; What You Mean the Most

"Talking in Circles" is a four track EP of original large ensemble jazz music by composer Devin Reilly. Featuring compositions written from 2015 to 2018, the album draws on influences from traditional and modern big band to chamber and electronic music, to rock and metal. The EP was recorded primarily in Seattle — with principle tracking taking place at Synergy Productions — and was co-produced by Alek Edmonds (Zap Mama, Marcus Miller). It features album art designed by Jeremy Dean (John Mayer, Dead & Company, The Rolling Stones). The music featured on "Talking in Circles" was written for a ten-piece big band consisting of a three-piece wind section, a three-piece brass section, and a standard four-piece rhythm section. The wind section consists of alto sax, tenor sax, and a bass and B-flat clarinet; the brass of trumpet and two trombones; and the rhythm of guitar, keyboards, electric and upright bass, and drums.   By combining elements of traditional instrumentation and orchestration with modern production techniques, Talking in Circles presents the large ensemble as a contemporary and vital musical format, and explores what it means to make a big band record in 2019.

Music from the Early 21st Century

All About Jazz musician pages are maintained by musicians, publicists and trusted members like you. Interested? Tell us why you would like to improve the Talking in Circles musician page.