Tamara Usatova is a Russian soul/pop/jazz singer and songwriter who began her career back in Russia where she was born. She acquired her stage experience through numerous gigs and appearances, performing non-stop with jazz and pop bands in Ukraine, Russia and the U.S. After winning a scholarship to Berklee College Of Music, Tamara decided to pursue her goal of becoming a professional singer and songwriter.

Since 2012, she discovered a passion for writing songs and is now very successful in it. One of her new songs, “Watching the World Go By”, was chosen out of 150 submissions, to be performed at Boston’s “Perfect Pitch” contest in March 2013.

In 2012 she got a chance to work as a singer for a famous Russian artist Alsou and to participate in the big anniversary concert together with Stevie Wonder musicians Ryan Kilgore, Darryl Munyungo Jackson, Gigi Gonaway.

Currently, Tamara is making her first album, collaborating with different musicians and writing music for other artists.

Tamara combines her love for the great soul, jazz and R&B singers in her music with influences from Ella Fitzgerald, Aretha Franklin and Billie Holiday to Anita Baker, Whitney Houston and Celine Dion to name a few.

Read more articles
Destined to be a star in her own right, Tamara is slowly becoming one of the most in-demand singers in the NYC tri-state area and usually leaves her fans and events guests breathless with her amazing voice.” 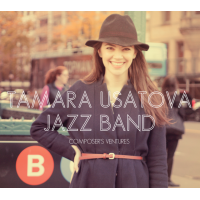 All About Jazz musician pages are maintained by musicians, publicists and trusted members like you. Interested? Tell us why you would like to improve the Tamara Usatova musician page.