A pioneer hard bopper on the tenor and recognized as one of the masters in the L.A. Central Avenue scene, Edwards leaves a huge legacy of recorded music, stretching from the Forties right through to his death in 2003.

Born in Jackson, Mississippi, on 26th April 1924, Edwards moved to Los Angeles in 1945, first coming to attention the following year when, with trumpeter Howard McGhee's group, he recorded the groundbreaking bebop tune, “Up In Dodo's Room.”

By the end of that decade Edwards was sufficiently well known to front his own bands. In 1949 he was also one of the first members of the Lighthouse All Stars, the group based at the famous Lighthouse Club in Hermosa Beach.

Five years later, in 1954, Edwards was invited to join the Max Roach Quintet, a group that also featured legendary trumpeter Clifford Brown. Edwards' tenor perfectly complemented Brown's eloquent style, a partnership also helped by Teddy's growing talents as a composer. Indeed, the Quintet's recording of Edwards' classic “Sunset Eyes” is a testament to the effectiveness of the relationship.

By the mid-Fifties Edwards was long established as a regular at West Coast festivals and clubs and, over the next few years, he worked with such diverse musicians as Benny Goodman, Les McCann, Dizzy Gillespie, Milt Jackson, Ray Brown, Benny Carter, Hampton Hawes, Earl Hines and Gerald Wilson. He also wrote songs for Nancy Wilson, Jimmy Witherspoon and Ernie Andrews.

In 1978 Edwards came to Europe for the first of what became regular visits. Among the dates were festivals in Norway, Holland and Belgium.

Edwards' talents came to the attention of a wider audience when, in 1982, he teamed up with the singer Tom Waits on his Oscar-nominated soundtrack for Francis Ford Coppola's film, “One From the Heart.” Edwards also joined Waits on a tour of Australia and New Zealand that same year. It was the start of a lifetime friendship, a relationship that also included Waits' appearance on Teddy Edwards' 1991 album, “Mississippi Lad.”

Despite recurring illness, Edwards continued to play and record throughout the Nineties. His schedule included European festivals and UK tours as well as shows throughout the United States. A jazz player of unique talent, Edwards will be remembered as a consistently inventive and dexterous musician. 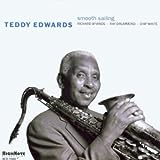 The Legend Of Teddy...

All About Jazz musician pages are maintained by musicians, publicists and trusted members like you. Interested? Tell us why you would like to improve the Teddy Edwards musician page.