Vocalist and jazz violinist Teresa Broadwell is formally trained, holding a BM from the Crane School of Music, and an MA in Jazz Studies from the College of St. Rose. Her vocal influences include: Lambert, Hendricks and Ross; Eddie Jefferson; King Pleasure; Sarah Vaughan; Betty Carter; Ella Fitzgerald; and Anita O'Day. On fiddle, she draws from Stuff Smith, Joe Venuti, Matt Glaser, and Stephan Grappelli.

Other past recordings include: “Sunny Side of the Street,” with the “New Moon Swing Band,” (a group that performed on Garrison Keillor's “A Prairie Home Companion” radio show) and “Everything's Jake,” featuring her swing band “Thrivin' on A Riff.”

Broadwell moved to the Capital Region in the early ’80’s , where she formed her own groups, performing at concerts, festivals, radio and television shows, and jazz clubs in the greater Northeast. Teresa’s groups have performed with and/or opened concerts for musical luminaries such as Stan Getz, Jon Hendricks, Marc O’Connor; Asleep at the Wheel; Leon Redbone, and baritone sax great Nick Brignola. Broadwell has performed at musical hotspots including Jazzmania in New York City; the Cellar Door in Washington DC; Ryles in Cambridge MA; Sandy's Jazz Revival Bar in Beverly MA; the Van Dyke in Schenectady, NY; and Red Creek in Rochester, NY. 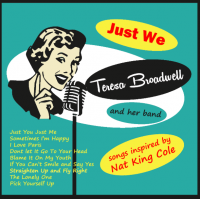 All About Jazz musician pages are maintained by musicians, publicists and trusted members like you. Interested? Tell us why you would like to improve the Teresa Broadwell musician page.