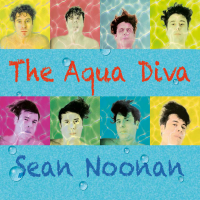 A Sunny Day; When My Band Goes With Me On The Road; As The World Spins Around Me; Butterflies Away; Don Knotts; Elijah Rocks; Smoking Man; The Aqua Diva; Where Would I Go; Make Her Great Again.

"Independence might be the ruling concept of this drummer/leader’s career. It defines a common relationship not only among his hands, feet, and voice, but between his art and almost everything else in drumland". Modern Drummer Magazine "The drummer and composer Sean Noonan approaches postmodern jazz and world music from the same angle of self-discovery ....he manages to make his pieces speak coherently, and in a unified voice." The New York Times Rhythmic storyteller Sean Noonan composes and conducts with a pair of drum sticks original multi-stylistic music. His “wandering folk” theory captures the elusiveness of ever-evolving world music traditions and reorients them through his own distinctive lens, fusing his discoveries from harmolodic jazz-rock to avant-garde classical music. The far-ranging sounds of Noonan’s wide-spectrum music combines the loquacity of an Irish bard, the narrative rhythms of Samuel Beckett, and the raw physicality of a street-smart boxer. The treasures that he finds along the way are filtered through his distinctive vision to become the unpredictable. Noonan has produced an explosion of over 20 unclassifiable releases featuring Malcolm Mooney, original singer of CAN, Mat Maneri, Marc Ribot, Jamaaladeen Tacuma and Malian Griot Abdoulaye Diabaté, featured on the Afro-Celtic album Boxing Dreams. The Quietus describes the 2017 record, Man No Longer Me as, “primetime Sean Noonan. The sound of an artist in his imperial phase. Intense, daft, tricksy, virtuoso, addictive: an absolute trip from a “modern-day sonic griot”. Intro Magazine says “As if the early Pink Floyd had a freejazz session with The Mars Volta in Africa.” Peter Bitenc and Alex Marcelo, the pianist of jazz legend Yusef Lateef were featured on the 2016 release, Memorable Sticks again join him on The Aqua Diva, which is rooted in a wide spectrum of American musical, cultural and lyrical themes. Noonan recasts Don Knotts, the iconic T.V. personality with experimentalist Conlon Nancarrow, in a 12 tone additive rhythm composition. Where would I go, is a folk song adaptation of Wayfaring Stranger and Elijah Rocks is a traditional spiritual. The Irish-American drummer with a theatrical bent scripts tracks 1, 4, 8, 10 like a soap opera series. T.A.D. (The Aqua Diva) is stalked by Butterflies who is jealous of Bubbles for having an affair with T.A.D. which ends with Butterflies murdering them in a swinger club swimming pool. Noonan’s original story has a direct correlation with his Zappanation Rock Opera that was inspired by Frank Zappa and Edgard Varèse, that was recently premiered in Germany.

All About Jazz musician pages are maintained by musicians, publicists and trusted members like you. Interested? Tell us why you would like to improve the The Aqua Diva musician page.