The Art of Contemporary Improvisation 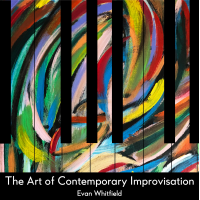 This album was completely improvised: there was no written music used before or during the process. Every track was conceived “in the moment”, with the intention of being entirely through-composed. The majority of the album was recorded in one or two takes, with some of the improvisations requiring up to five different takes and a bit of digital editing. I like to think of contemporary improvisation as a process, more than a practice or a sound. It is in the process that the complexity of sound is born. The techniques that are required in the process are based on years of psychological musical practice, aural memory, and long-term melodic and harmonic adaptation, as well as the learned physical technique of playing a grand piano or a digital keyboard. The styles that I have incorporated into this process range from Impressionism, Romanticism, Primitivism, Traditional Jazz, Modern Jazz, Latin Jazz, Neo-Classicism, Avant-Garde and New-Age. These ideas, these unions of mind, soul and ear, are spontaneous as well as hierarchical, in that the transformations and adaptations of many different styles of music from my past are ordered into a constantly evolving organic system, like signals being transmitted and relayed to each other over a vast landscape. It is the unfolding of this hierarchy from a higher dimension into our immediate perspective that generates the sound that is my sound. I believe that music should always be curious, constantly pushing the boundaries of thought, expanding into a quest for limitless wonder and amazement. The process of improvisation enables musical ideas to be explored exponentially, continuously building upon previous explorations. There are several composers, jazz pianists and teachers that have influenced my sound over time, and these include Franz Liszt, Maurice Ravel, Igor Stravinsky, Keith Jarrett, Brad Mehldau, Frank Zappa, Ran Blake, and Cecil Taylor. The absorption, imitation and reflection of artistic content from others is imperative for the development of an individual’s own craft. However, there is still the need for innovation and experimentation, to continue to advance an art form, to allow for contemporary expansion. As a composer, performer and improviser, I believe I am offering a personal and revolutionary evolution of the process, the art of making music spontaneously, the art of contemporary improvisation. The ultimate gift would be that the listener, on his or her journey through my brief encapsulation of sonic frequency in time, finds this music to be invigorating, sentimental, optimistic and enlightening. This album was recorded on a Roland Juno 88 digital keyboard, with Logic Pro X running on a MacBook Pro, during March to July, 2019. All tracks were mastered at the SoundLab (Frankford Wayne), at Cd Baby Disc Manufacturing.

Help improve the The Art of Contemporary Improvisation page

All About Jazz musician pages are maintained by musicians, publicists and trusted members like you. Interested? Tell us why you would like to improve the The Art of Contemporary Improvisation musician page.