The Art of Solo Guitar 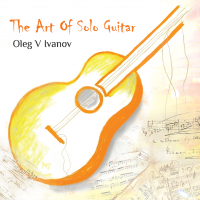 The first solo guitar album in history of Russian jazz was released Los Angeles, August 20, 2020. On August 20, Oleg Ivanov's debut album "The Art of Solo Guitar" was released. An album consisting of arrangements for jazz solo guitar and several classical pieces. Technically, the album is multifaceted and includes a wide palette of technically-expressive means. For instance, counterpoint, block chord solos, tapping, sparkling solos using pick solos and finger playing. Moreover, the album is full of an amazing melodic approach to improvisation. Oleg Ivanov took guitar improvisation to a new level by enriching it with a melodic approach and adapting it to the solo guitar style. It feels like two guitarists are talking to each other in different registers of the instrument. All compositions are listened to easily and not forcedly, which is a rarity for such a genre as a solo instrumental album. A few words from Oleg Ivanov about his album: ​ "The Art of Solo Guitar" is my dedication to this beautiful instrument. In addition, my desire to put this instrument on a new level. Music world which I did create on this CD using jazz standard and classical music, full of rich melodies. I am sure that this "The Art of Solo Guitar" will appeal to everyone. ​

Help improve the The Art of Solo Guitar page

All About Jazz musician pages are maintained by musicians, publicists and trusted members like you. Interested? Tell us why you would like to improve the The Art of Solo Guitar musician page.