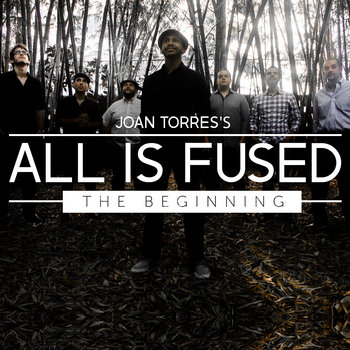 The Beginning by Joan Torres's All Is Fused Share / Embed Wishlist supported by Santyjazz thumbnail Richard Kaufman thumbnail Summoning 00:00 / 06:41 Digital Album Streaming + Download Includes unlimited streaming via the free Bandcamp app, plus high-quality download in MP3, FLAC and more. Buy Digital Album $10 USD or more Send as Gift Full Digital Discography Get all 3 Joan Torres's All Is Fused releases available on Bandcamp and save 20%. Includes unlimited streaming via the free Bandcamp app, plus high-quality downloads of Of the Musical, The Beginning, and Before. Buy Digital Discography $21.60 USD or more (20% OFF) Send as Gift 1. Summoning 06:41 2. Release 05:50 3. Disjunct Realities 05:24 4. Mess 08:43 5. There Was You 10:47 6. Disruption 10:36 7. Nightmare 05:41 8. Escape 08:57 about Album Notes: Bassist and educator Joan Torres does not believe in rushing things. He called his first CD “Before” and this one, actually his second, “The Beginning”. “One of my goals is to find my own voice as a composer”, says the 26-year-old musician. “It has to be honest and original. When I was doing ‘Before’ I was still searching for my place. Now I have a clearer picture”. That’s the mark of an artist lovingly devoted to the development of his craft, working step by step and distilling the influence of the diverse musical styles he has listened to into his own mode of self-expression. “I have been playing the bass and listening to records since I was 11, so I have focused on many artists and records through the years”, says the Dominican Republic-born, Puerto Rico-raised musician. Among his many influences, he lists Dizzy Gillespie, John Coltrane, Miles Davis, Igor Stravinsky, Antonio Carlos Jobim, Pat Metheny, Weather Report, Miguel Zenón, Dafnis Prieto, Bob Marley, Juan Luis Guerra, Astor Piazzolla, The Red Hot Chili Peppers, Daft Punk and Helios, among others. So it’s no wonder his band is called All Is Fused, since his music has a little of all those influences. It’s not a reference to the term “fusion” as it is commonly used in the jazz world, meaning a combination of jazz and rock. “I like to call my music ‘jazz +’, or jazz plus. Also, after listening to it some people have called it modern fusion, and during the concerts we did in New Orleans, Louisiana, it was called ‘progressive jazz’. I like that, because I think the ‘progressive’ part is fundamental to what we’re trying to do”. Call it what you may, Joan Torres’ All Is Fused’s music is an exhilarating mix, urgent and calm by turns (often in the same selection), with frequent cinematic overtones and brimming with ideas. It’s played by a fine group of young Puerto Rican musicians, most of which also appeared in “Before”: Sergio González on guitar, Emanuel Rivera on piano, Fernando García on drums (whose forceful beats give this music much of its energy and drive) and, on two selections each, Jonathan Suazo on alto sax and Gabriel Vicéns on guitar. Gerson Orjuela makes a guest appearance on the first tune, “Summoning”. “Summoning”, by the way, is a good example of what Torres’ music is all about. A mysterious piano introduction gives way to a punchy, staccato theme which is soon replaced by a semi-Latin montuno over which González takes the first solo of the album. The pace calms down a bit for the piano solo and then picks up again, with an insistent vamp, for the fiery, simultaneous drum improvisations of García and Orjuela. But don’t get the idea this is a mishmash of tempos and feelings; everything here flows naturally and with total coherence. All is fused, certainly. “There Was You” introduces new colors, with the use of electric piano and an eloquent solo by Suazo, who, after a careful start, goes into a genuine whirlwind of emotion. He does the same on the next, hard-driving tune, “Disruption”, a truly memorable line. These two selections, both of which include beautiful, highly melodic improvisations by the leader on electric bass, constitute the centerpiece of this strong album and show Torres is not only a fine composer (he penned all the selections here) but also a first- rate soloist. Feelings of strength, alertness and clarity of purpose also propel “Release”, “Disjunct Realities” and the rock-tinged “Mess”, graced with a powerful solo by Vicéns. “Nightmare” is a three-way spectral conversation between the bass and the two guitars that would fit nicely in any film-noir setting. “Escape” concludes this auspicious “Beginning” in joyous fashion, with spirited solos from González and Rivera. Although this is a collection of forward-looking music, defined by its freshness, vigor and the desire to stake its own ground, Joan Torres is well aware his journey has just begun. “In the future I would like this album to be seen as the first time my voice expressed itself with more impetus and confidence”, he humbly states. It will also be seen as the first chapter (or is it the second one?) of what promises to be a wonderful journey. Rafael Vega Curry Independent journalist

The Dance She Spoke

Help improve the The Beginning page

All About Jazz musician pages are maintained by musicians, publicists and trusted members like you. Interested? Tell us why you would like to improve the The Beginning musician page.