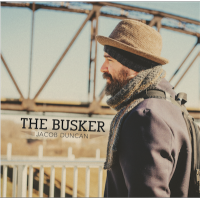 Jacob Duncan’s “The Busker” is a treasure — at once timeless, raw, distinctive, and passionate. The protagonists of Duncan’s autobiographical compositions are fellow companions, drifters, and triumphant nomads exclaiming their insignificance. The album balances acute sonic observations of a traveler’s microcosm with grand hints at the struggle to understand the macrocosm. The compositions are melodically- driven, sincere, musical conversations between storytellers. They are undisguised, earthy improvisations about comings and goings, estrangements, and connections. Duncan’s arrangements are sometimes sad, sometimes playful, and always original. They are well-served by his masterful companions, John Goldsby on double bass and Craig Wagner on acoustic guitar. It is paradoxical that, The Busker, a musical memoir of an American traveling other continents, is in form and spirit the ultimate distillation of American music. Duncan’s compositions are constructed of the greatest melodic aspects of the American songbook and, the intimate, yet universal colloquialisms of the American folk traditions. Despite being instrumentals, each piece evokes the voice of a troubadour lulling the listener into a lucid dream, in which they become the teller of their own tall tales.

Help improve the The Busker page

All About Jazz musician pages are maintained by musicians, publicists and trusted members like you. Interested? Tell us why you would like to improve the The Busker musician page.