One Night At Chris’ 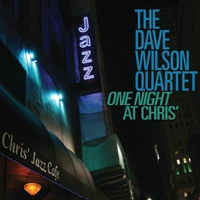 Ocean Blues; Friend of the Devil; Norwegian Wood (This Bird Has Flown); My Own Prison; Biggest Part of Me; Movin' On; God Only Knows; Untitled Modal Tune; Summertime; Spiral.

As brawny-toned tenorman Dave Wilson said, in reflecting back on this inspired set, “It was a good night!” That’s an understatement. One Night at Chris’ bristles with a kind of visceral energy and sheer burn that lit up the crowd at the famed Chris’ Jazz Cafe in Philadelphia in March of 2018 and makes for invigorating listening now. Wilson’s fifth recording as a leader and first live outing captures his quartet’s simpatico on an exceptionally good night.

“There was just a real good interaction in the rhythm section,” noted the saxophonist, saluting his stellar crew of pianist Kirk Reese, bassist Tony Marino and drummer Dan Monaghan. Together they deliver the goods on four Wilson originals along with savvy adaptations of familiar pop tunes, filtered through a distinctly jazzy prism.

A student of the great tenor saxophonist and educator Bill Barron, whom he studied with at Wesleyan University during the mid ‘70s, Wilson is a dedicated jazzman with one foot in bebop and the other striding into the New Thing, following a path pioneered by one of his biggest influences, iconic tenor saxophonist John Coltrane. “Trane got me into playing the saxophone when I was 15 years old,” says the Bronxville, New York native and longtime resident of Lancaster, Pennsylvania. “I was a clarinet player and then listening to him on Live at the Village Vanguard and My Favorite Things around 1970-71 really got me involved in playing the tenor.”

While immersing himself in Trane and later Dexter Gordon, Wilson also came under the spell of rock’s original jam band. “During the late ‘70’s to early ‘80s, I saw the Grateful Dead many a time and it turned my head around,” he recalled. Wilson would later put his jazzy stamp on the Dead’s “Cassidy” on his 2015 release, There Never Was. Here he tackles “Friend of the Devil” in a brisk, Latin flavored reading that has him soaring in lyrical fashion on soprano sax.

Along with covering the Dead, Wilson’s quartet also interprets other pop tunes — The Beatles’ “Norwegian Wood,” Creed’s “My Own Prison,” Ambrosia’s 1980 hit single, “Biggest Part of Me,” and the Beach Boys’ “God Only Knows.” “There are certain pop tunes that I feel like I have a personal relationship with,” he explained. “They just reach out and grab me.”

The set kicks off with Wilson’s earthy original, “Ocean Blue,” a funk-tinged boogaloo that previously appeared on the saxophonist’s 2010 studio album, Spiral. His bold tenor playing in both the low register and altissimo range of his horn resonates with old school authority here as he swaggers and double-times with impunity on his solo. Pianist Reese floats nimbly here, pushing the harmonic fabric of the tune while showcasing incendiary chops and a couple of Herbie Hancock-isms along the way. “We’ve been playing together for a long time, so we know each other pretty well,” said Wilson of his piano partner. “He’s got strong roots in this area and he stayed in this area. I’m lucky to have him.” Wilson has equally high praise for Monaghan, whose intuitive swing factor fuels this session. “For me, a lot of what’s happening in the music comes from the drums, and Dan is one of the top drummers in Philly right now. He’s more from the bebop tradition and he plays with (Philly tenor sax legend) Larry McKenna, so he’s regarded as more of a swinging type of cat.” Reese’s deft keyboard work comes to the fore on the quartet’s brisk romp through “Friend of the Devil” and underscores a mellow, lightly swinging take on “Norwegian Wood,” which has Wilson delivering sumptuous tones and flowing lines around the familiar theme and also features a probing bass solo from longtime Dave Liebman sideman Marino, a key contributor on this live date. “For at least every concert type of gig I do, I’ll call Tony first,” said the bandleader, “because he brings out the best in me and the music and also provides a comfort level non- paralleled.”

The quartet next delves into a rollicking rendition of “My Own Prison,” an anthemic tune from the ‘90s post- grunge band from Tallahassee, Creed, before settling into a smooth take on Ambrosia’s 1980 hit single, “Biggest Part Of Me.” Midway through this subdued but hypnotic take, Wilson unleashes some urgent tenor blowing spurred on by Monaghan’s whirlwind approach to the kit.

Sparks fly on “Untitled Modal Tune,” a kinetic burner that has Reese channeling his inner McCoy Tyner and Wilson wailing with abandon. Previously recorded on the saxophonist’s 2002, album, Through the Times, this live version is the perfect uptempo blowing vehicle to show off both Reese’s and Wilson’s strengths. Monaghan propels this cooker, pushing the soloists to some ecstatic heights before engaging in some fiery exchanges of eights with them. Their rhythmically-charged, Afro-Cuban take on the Gershwin classic, “Summertime,” launches into some exploratory free blowing midway through and also showcases a riveting unaccompanied drum solo from Monaghan.

The set concludes with Wilson’s “Spiral” (also the title track of his 2010 release). A pulsating piece that opens up to some heady excursions by the group, it culminates in some heated exchanges between saxophonist and pianist.

The crackling intensity of One Night at Chris’ is a testament to what can happen on the bandstand on any given night. And this was a particularly good night indeed. — Bill Milkowski

Recording Self Produced One Night At Chris’ Dave Wilson 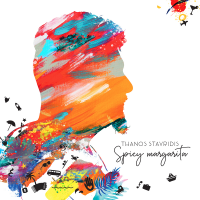 Help improve the One Night At Chris’ page

All About Jazz musician pages are maintained by musicians, publicists and trusted members like you. Interested? Tell us why you would like to improve the One Night At Chris’ musician page.