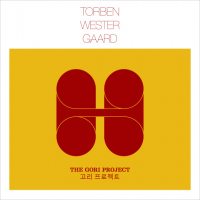 Far (Blandt Graner); Orange; Turns; Indigo; Make No Gaps; The Blues in You; Beyond (Criticism and Praise); Courage.

Coming just after the 60th anniversary of diplomatic relations between Denmark and South Korea, The Gori Project brings together 2 renowned traditional South Korean musicians with 3 of Denmark’s most established jazz performers. Led by Danish bassist & composer Torben Westergaard, the album fuses together two diverse sets of instruments, styles, harmonies & melodies into a new cultural expression. Marking his 13th album as a bandleader, Westergard’s electric bass grooves and atmospheric synth lay the foundation alongside two very different percussionists: the driving jazz-pop-sensibilities of Jacob Andersen and that of Byunggil Choi, traditional Korean music specialist. These three voices underpin the shimmering, filmic lines of Nordic trumpeter René Damsbak and the traditional zither-like gayagum playing from Eunhee Choi. The result: a deeply intriguing set of music which seems to effortlessly mix and meld the two styles and make it its own.

All About Jazz musician pages are maintained by musicians, publicists and trusted members like you. Interested? Tell us why you would like to improve the The Gori Project musician page.