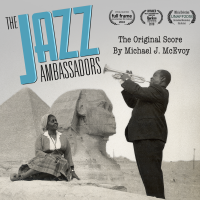 The documentary reveals how the U.S. State Department unwittingly gave the burgeoning Civil Rights’ movement a major voice on the world stage just when it needed one most. Directed by Peabody Award- winner Hugo Berkeley and produced by Emmy-winner Mick Csáky, the film features striking archival footage, photos and radio clips, with iconic performances throughout. American composer, Michael J McEvoy, rose to the challenge of writing an original score that would capture the atmosphere of the times, while creating an underscore that blended seamlessly with the iconic live performances in the film. With nods to jazz innovators Lee Morgan, John Coltrane and Mile Davis, McEvoy’s music is at times meditative and reflective and, at others, segues into hard driving grooves encompassing bebop and blues. While complementing the narrative, McEvoy’s score also stands alone as a unique and mesmerising soundscape.

All About Jazz musician pages are maintained by musicians, publicists and trusted members like you. Interested? Tell us why you would like to improve the The Jazz Ambassadors (Original Score) musician page.